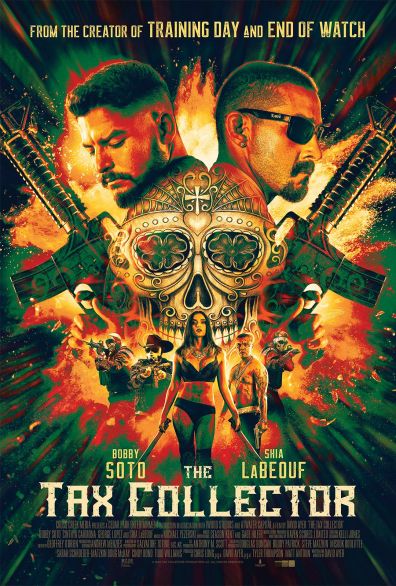 One man’s world is turned upside down as he fights for his life and that of his family in this tense and brutal action film from the director of Training Day.

David Cuevas is a family man who lives in the streets of East Los Angeles. His job is to collect “taxes” from various gangs in the area as his boss is the currently incarcerated Wizard. While Wizard is in prison, David’s uncle Luis makes sure the job is done right. David works with best friend Creeper, who is known to be a loose cannon when it calls for it. If the gangs pay their taxes, all goes well. But if not, they will get beaten up badly. However, one night is set to change David’s life forever.

Upon arriving to collect from local gang boss Venom, Venom surprises everyone when not only will he refuse to pay David, but he is now under the protection of Conejo. Conejo is a former rival of Wizard’s who had run out of town a decade ago. Learning Wizard is incarcerated, Conejo has returned and decides to end Wizard’s business but offers David a job. When David refuses, Conejo makes a vow to destroy David’s livelihood, forcing David to protect everyone he cares about as war is about to break out.

After having issues with A-list producers, notably Suicide Squad, writer-director David Ayer decides to go back to his grounded gritty look at life and on his terms. This film, which revolves around a gang “tax collector” who finds himself in a very seriously and potentially dangerous situation. While the premise is good, there are a few issues with the film that will ultimately make this a movie that may be watched once or twice before being forgotten in the banals that is the backburner.

Let’s start with the positive. Lead actor Bobby Soto does a great job of carrying the film in the role of David Cuevas. He has this duality in terms of the character. We see the good-natured side in the film’s opening, as a loving family man who is loyal to his family and even helps his in-laws. Then, we see the business side of David as he is a tough enforcer who collects taxes from various gangs in the area who respect his boss, Wizard, who is incarcerated. When he is with Creeper, his fellow enforcer and BFF, played by Shia LaBeouf, it serves as somewhat of something that could be a buddy action film like the recent team-up of Scott Adkins and Louis Mandylor, The Debt Collector and its sequel, Debt Collectors.

However, this is where things seem a bit confusing. First, there is the character of Creeper. It had long been sourced in the media that LaBeouf may have been miscast as a Latino, but Ayer recently took to social media to confirm that Creeper is actually a Jewish boy raised in the area and has been consumed by his lifestyle. The issue lies is that LaBeouf just looks and ultimately is out of place.  Granted, his scenes with Soto are a hoot to watch when they are in the car talking about their non-enforcer lives and all. Those parts are funny, but when we see Creeper attempt to intimidate people, you can’t help but chuckle and ask yourself, “Am I supposed to take him seriously?”

The second half of the film goes pretty extreme with its depiction of brutal violence. From a shootout between David’s gang and Conejo’s gang to the shocking finale of the film, Ayer just amps up the load of violence after giving subtle nuances. That includes a certain character being killed and his head placed in a box that becomes the catalyst for the violent second half. Conejo himself, played by the underground hip hop artist of the same name, has got to be one of the nuttiest villains seen in a while. He is determined to make himself known and a very disturbing scene involves him preparing for war by drenching himself in sacrificial blood…literally!

The Tax Collector may have had its miniature flaws, but overall, it’s a wild ride with a lead character whose duality is the driving force of the film thanks to an excellent lead performance by Bobby Soto and a really good supporting cast. Despite wanting to laugh at Shia LaBeouf’s intimidation factor, his scenes with Soto in the truck are quite a delight!