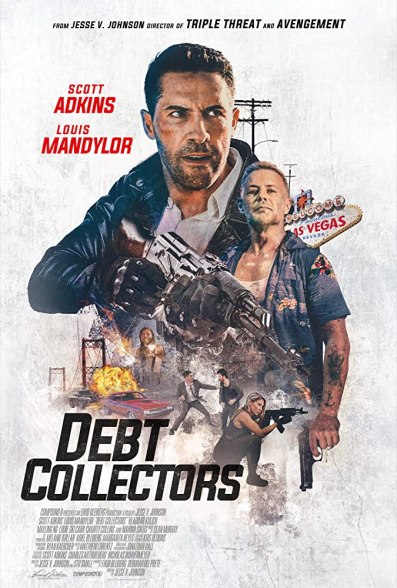 The duo of French and Sue are back in this superior action-packed sequel to the 2018 film!

It has been seven months since the massive shootout that apparently claimed the lives of debt collectors French and Sue. However, having survived the attack, French makes ends meet by working as a bouncer for a local bar. When he confronts some local rednecks who cause trouble, French is in the shock of a lifetime when he learns Sue is still alive. Sue informs French that their former boss, Tommy, has asked them for one final job before they can go off into the sunset.

Tommy has asked Sue and French to collect three debts. However, Sue learns something very suspicious is going on when he converses with Tommy. During one of their collections, a major twist is revealed that changes the course of the job. With two fellows hot on their trail, the duo finds themselves chased down not just from them, but people involved with their collecting. It reaches a point where even Sue and French find their rekindled bond tested when all is revealed. Will these two get past their issues with each other when it’s time to return the money collected?

2018’s The Debt Collector was a fun action-comedy from director Jesse V. Johnson that highlighted the chemistry between lead stars Scott Adkins and Louis Mandylor. The duo displayed some hilarious chemistry together when French was the new collector with Mandylor’s tough talking veteran. Two years later, it was announced that Johnson, Adkins, and Mandylor would be returning for a sequel, having shot the film low-key, to the surprise of fans.

The result is a sequel that really amps up the action and continues the phenomenal chemistry between Adkins and Mandylor. Yes, what starts out as a level of insanity due to the finale of the original just shows the level of excellent the two stars bring together. Once Mandylor’s Sue shows up, the chemistry is back. It is hilarious to see what Sue thinks of French’s car to their conversation about what they think of the differences between boxing and martial arts, which Segway into a fun comedic action scene inside a boxing club to collect a debt.

Aside from Mandylor and Adkins, Vladimir Kulich returns as their boss Tommy, who in an ironic twist of fate, is revealed to be involved with someone else and this causes some of the mayhem that ensues as we see French and Sue relentless followed and mocked by two new mystery characters. There are also some great appearances from Lady Bloodfight heavy and Wonder Woman co-star Mayling Ng as part of the first collection’s crew while we get to see the great Vernon Wells in a cameo role as one of the people our heroes must collect from.

Also returning to the fray is Luke LaFontaine as the film’s fight choreographer and stunt coordinator. Adkins gets to once again show off his martial arts skills, starting with a bar fight after having a conversation with rednecks about the British losing to the U.S. in the American Revolution. However, we get to see more Mandylor in action as well. Having seen him fight in films like Champions and the first season of short-lived series Martial Law, it’s great to see Mandylor throw down again using his boxing skills and some Muay Thai elbows when the script calls for it. No wonder why Adkins and Mandylor can be described as a “dream team”.

Debt Collectors is a sequel that’s more exciting than the original, thanks in part to the chemistry of Scott Adkins and Louis Mandylor. They are a definitive action-comedy “dream team”.