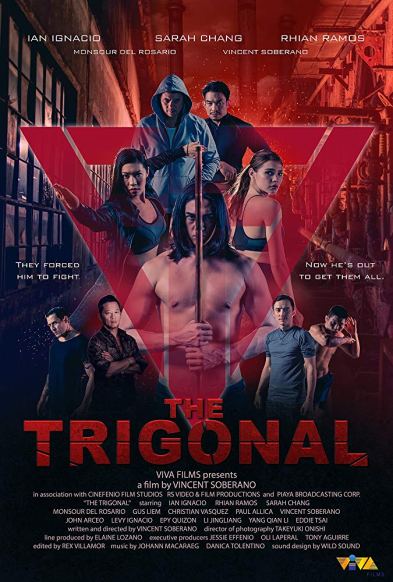 This Filipino martial arts action thriller is a wild throwback to the straight to home video B-movie glory days of the 80’s and early 90s.

Jacob Casa is a world champion mixed martial artist and teacher. Recently winning another championship, he celebrates with his wife Annie and his friends. On the night of their celebration, Annie surprises Jacob with the major news that she is pregnant. She hopes that Jacob will focus solely on teaching and give up fighting. Reluctant at first, Jacob ultimately agrees. However, the next day, Jacob is invited by a man named Henry Tan to enter his tournament, the Trigonal. Jacob refuses at the request of Annie.

That night at the dojo, Tan’s men invade and kill Jacob’s best friend Dodoy and assault Annie to the point where when Jacob arrives, it is too late. She has been put into a coma and has lost the baby. Seething with rage, Jacob turns to Detective Tony Pascual, who has been wanting to stop Tan for a long time now as he is a notorious drug dealer. Learning that the Trigonal is a tournament that is a cover-up for Tan’s experiment on a new potential street drug, Jacob decides to help Tony out by entering the tournament. However, he will need some help and finds it in Chinese kung fu expert Mei Li and his old martial arts teacher, Sensei Mike Vasquez. Will Jacob rise to the challenge of these enhanced warriors?

Vincent Soberano wrote the script and directed this martial arts action thriller, which looks to have been influenced by the likes of the glory days of 1980’s and early 1990’s martial arts action films. The film overall is a pretty typical plot with a few twists here and there. However, for those who love a good throwback film, this is definitely a safe bet thanks to it cast and its fight sequences, which have that old school feel to them rather than the martial arts cinema we are used to these days.

Taekwondo champion and 2nd generation action star Ian Ignacio leads the cast as Jacob, the hero of the film who starts out all happy but when he’s forced into a situation he’s never imagined, he is seething with revenge. Ignacio, the son of Filipino action star and karate expert Levy Ignacio and the protégé of taekwondo ambassador Monsour del Rosario, has the looks and skills to be an action hero. Here, he does a great job when he’s fighting. In a show of support, the elder Ignacio appears as the Chemist, who makes the experimental drug for crime boss Henry Tan, played by Gus Liem; and del Rosario plays Jacob’s mentor Mike, who helps him in his time of need.

Sarah Chang doubles as co-star and the film’s action director. The five-time U.S. National wushu champion brings in an action style that is reminiscent of the old days of Bloodsport and Bloodfist II to name a few. Aside from the young Ignacio showcasing his martial arts skills, there are some nice fights which Chang herself is involved in, including a two-on-one against two women who look like beefed-up doubles of a female duo that Sibelle Hu faced off against in Crystal Hunt. Soberano, who also plays police officer Tony, gets to engage in a fight against the Chemist and we get to see del Rosario help out and show why he is the Taekwondo Ambassador of the Philippines.

As for the “Chong Li” of the Trigonal, Australian Paul Allica does a pretty good job at playing champion James Lowe as a very cocky and arrogant fighter. Trained by a former member of the Jackie Chan Stunt Team, Allica has the action chops and his weapons filled fights with the young Ignacio is well done for this caliber of action film. While the fights are not on the level of a Scott Adkins kickfest, they do bring back a sense of nostalgia, making them enjoyable to watch.

The Trigonal: Fight for Justice is a welcome throwback to the 1980’s martial arts action film genre with a breakout performance by Ian Ignacio, who is definitely an action star on the rise.