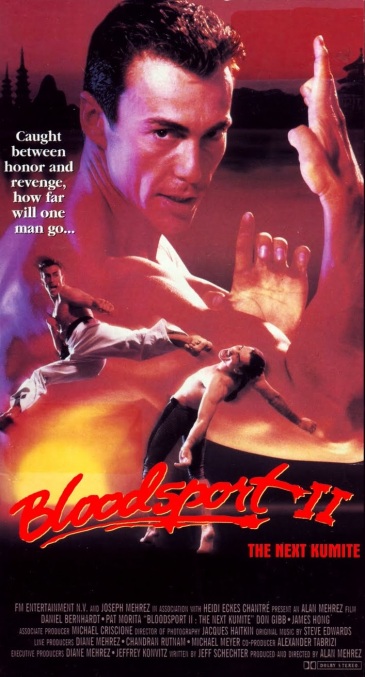 Nearly a decade after Jean-Claude Van Damme entered the Kumite to breakout as an action legend, this sequel brings in a new hero in the form of Swiss-born model and martial artist Daniel Bernhardt.

Alex Cardo is a master thief who has infiltrated a party run by businessman Mr. Leung, who holds a sacred sword. Cardo and his partner John plan to steal the sword in hopes to sell it and make some major money. However, when John double crosses Alex, Alex is stopped at the airport and is imprisoned. While incarcerated, he finds himself constantly beaten by sadistic guard Demon. However, finding remorse for his actions, he learns his cellmate, the elderly Sun, is a martial arts master.

Alex begins to learn under Master Sun, eventually learning the technique known as the “Iron Hand”. Alex has learned Demon is entering the martial arts tournament known as the Kumite. Mr. Leung, learning of Alex’s remorseful actions, makes a deal for Alex to enter the Kumite as well. However, the condition is that Alex must also find a way to retrieve the stolen sword, which is to be the prize at the tournament. Arriving at the Kumite, Alex finds himself in a world he never imagined and along the way, he will make some new friends, but also faces his past in the form of Demon.

The original Bloodsport, based on the alleged true story of Frank Dux, became the breakout film for Belgian martial arts champion turned action legend Jean-Claude Van Damme. For years, many have wondered if there would be a sequel and nine years later, it finally had arrived, without Van Damme. Instead, a new story about redemption is done and a new star in the making has arrived in another European martial artist, with Daniel Bernhardt leading the way.

Bernhardt is truly the real deal when it comes to martial arts. His skills in Tae Kwon Do allows Bernhardt to showcase his kicking agility and while he may not have the helicopter kick that made Van Damme famous, Bernhardt is far from being a second-rate Van Damme. Bernhardt has his own set of moves and for what would be his breakout role, he does pretty well, bringing a little charm to the role when it comes to his relationship with Janine, played by Lori Lynn Dickerson.

What makes this sequel special is that while Van Damme doesn’t return as Frank Dux, we are treated to having one of the original film’s stars return to top form and that is Donald Gibb as Ray Jackson. Gibb was truly a highlight in the original film with his humor and mannerisms. Now as a handler for the Kumite, Jackson brings that witty humor all while being infatuated with the first female Kumite fighter, Kim Campbell, played by Lisa McCullough. It is like Jackson at times is mentoring Alex having that experience of being in the Kumite and along with two fellow fighters, Nick Hill’s Sergio and Ron Hall’s Cliff, Jackson becomes a reliable ally to Alex.

The excellent James Hong plays Master Sun, who becomes Alex’s mentor in the Iron Fist and helping him start up Alex’s road to redemption. Philip Tan brings a sense of deviance as John, Alex’s partner who becomes greedy and become the catalyst for Alex’s downfall. Ong Soo Han, a veteran of martial arts action films, gets his biggest role to date as the “Chong Li” of the film, the deadly prison guard Demon. Pat Morita makes the most of his screen time as Leung, the businessman who at first is a victim of Alex’s only to be the only man who can give Alex his freedom knowing he is remorseful for everything that’s happened.

Philip Tan not only stars in the film, but served as the film’s martial arts choreographer. What he did was ingenious. Nearly doubling the amount of fight action from the original film, Tan utilized all of the fighters in the film, showcasing the various skills they are well versed in. Nick Hill gets to show off his skills in Karate as Sergio while Ron Hall’s impeccable Wushu skills allows him to move with precision and acrobatic fury. Of course though, lead star Daniel Bernhardt gets to showcase his kicking skills along with the “Iron Hand” technique, which is a variation of the palm strike used in various films of the genre. The fights are truly exciting to watch in this film.

Bloodsport II: The Next Kumite is a pretty good straight-to-video sequel with exciting fights meshed with a story about redemption with Daniel Bernhardt leading the way in what can be considered his breakout role.