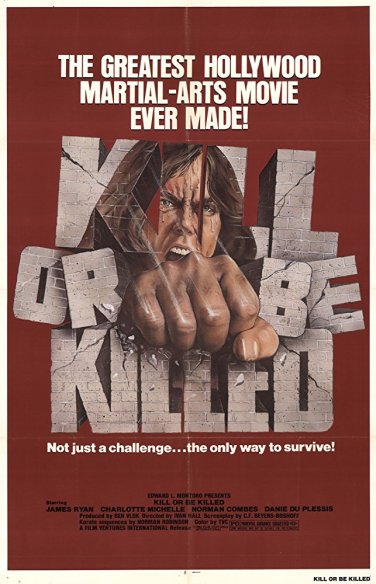 When this South African film was released in the United States in 1980, the film distributors marketed as “The Greatest Hollywood Martial Arts Film Made”. However, the film wasn’t made in Hollywood, but in South Africa. Nevertheless, the film hails as a cult classic that features real Japanese karate techniques.

Steve Hunt has tried out and successfully joined a karate team run by former Nazi karate champion Baron Von Rudloff. Steve soon learns that all is not as it seems. Originally in it for the money, he learns that Von Rudloff is hoping to challenge Miyagi, a Japanese sensei who defeated Von Rudloff in a match during World War II in a karate olympiad, pitting 20 of his fighters against 20 of Miyagi’s fighters.

When Steve decides to split, he takes his girlfriend Olga with him. However, when Von Rudloff sends his top fighter Ruell to kidnap Olga as a means for Steve to return to his team, Steve has other plans. He decides to return, but as a member of Miyagi’s team. While Von Rudloff is not happy, he does find a potential ace in the hole with the monster Luke. Will Steve have what it takes to help Miyagi’s team win and rescue the girl? Or will Von Rudloff do whatever it takes to make sure Steve loses it all?

In the 1970’s, martial arts films churned by the dozens, mainly in Hong Kong, Taiwan, and Japan. No one would ever guess that South Africa would churn out its own martial arts film. However, they did it and to this day, it is hailed as a cult classic. While the cast mainly comprised of whites due to its policy of apartheid, there is one Black karateka who in fact wins his match, showing that there can be equality in the martial world even if the country doesn’t have it.

James Ryan, who had a dance background prior to filming, takes the lead as Steve Hunt. For this brand of film, Ryan possesses some pretty good skills in martial arts and shows that he can take the lead in an action film. Despite being double for the acrobatic movements by karateka Derrick Lotz, Ryan still holds his own quite well under the team of Stan Schmidt and Norman Robinson, two pioneers in the South African martial arts industry.

The supporting cast of fighters is comprised of real-life fighters of the Japan Karate Association. It is great here that they all possess some intricate karate maneuvers. While it’s not the stuff of Jackie Chan and Sammo Hung, it is more reminiscent of perhaps some of the classic Sonny Chiba films but with more charisma in that the choreography looks like it can be used for perhaps an instruction tape.

In any case, Kill or Be Killed is definitely a cult classic and its 1981 sequel, Kill and Kill Again features most of the cast from this installment in a new storyline but the same karate techniques.
WFG RATING: B