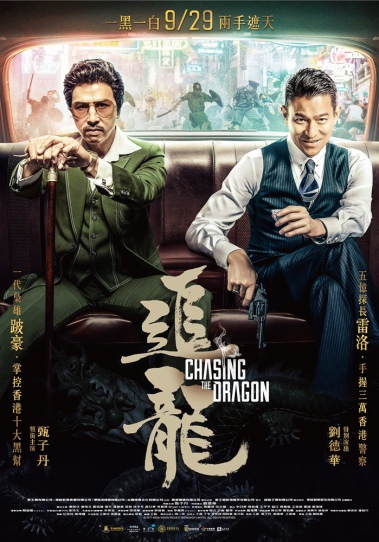 Donnie Yen stars in this fact-based film on the life of one of Hong Kong’s most notorious drug lords with Andy Lau reprising a role from a two-film series in the 1990’s.

In the year 1960, a man named Ho and his three best friends escaped China and headed for Hong Kong. There, they make their money by joining gangs in street fights. During one fateful night, Ho and his men find themselves enraging a British police officer, Hunter. However, they are saved by Lee Rock, a recently promoted sergeant major who is as corrupt as his fellow officers, but has the smarts to outwits those who rank above him. Ho and his friends one day incur the wrath of crime lord Chubby, who offers Ho and the others a job after Ho proves himself to have impeccable fighting skills.

As the years go by, Ho gains respect within the ghetto known as the Walled City. Plagued with issues involving his brother, who has dropped out of school and has become a drug addict, to the possible idea of a double cross, when Ho learns that Lee is set up to be framed and killed by the nephew of Walled City’s top gangster Master Dane, Ho saves Lee only to be betrayed by his now former boss, who cripples Ho. No longer being able to fight, Ho decides to use his street smarts when he joins forces with Lee Rock. However, with power comes greed and Ho soon finds himself biting the hand that feeds him as he is set to play a dangerous game that could cost many lives.

Surprisingly, one would never have thought that someone like Wong Jing, who has been more known for his buffoonery of films in the 1990’s, would have written this film let alone direct it. However, he collaborated with cinematographer Jason Kwan, who shares both writing and directing with Wong. However, Wong has had his fair share of serious films such as his Colour gangster film series and he has executive produced the original Young and Dangerous films. It is safe to say that if he’s not out there doing goofball-style films, then gangster films are truly his forte.

It is clear that action star Donnie Yen is slowly branching out into roles that allow him to do both his frenetic action skills and even turn in some dramatic chops as well. Ip Man was just the beginning of that transition period, but this film is truly becoming to take that cake. In what is a very bold move, Yen gets to mesh the two strengths in the first half of the film only to take the dramatic side in the second half as his character is in fact crippled. Yen’s character Crippled Ho is based on a real-life Hong Kong gangster, Ng Sek-Ho, who was one of Hong Kong’s most notorious drug lords. Yen pulls off all the stops to tackle the role and does quite a great job of it.

As for Andy Lau, the Heavenly King returns to a familiar role. In 1991, he starred in a two-part film series produced by Wong and directed by Lawrence Lau entitled Lee Rock. The film series was based on Lui Lok, a real-life officer who was involved in major corruption during the 60’s and 70’s. Lau reprises that role and having played the role before, he just seems like a natural fit. Not only does this film bring some excitement that we have Donnie Yen and Andy Lau in the same film, but they actually play each other well.

What many will find extremely important is that while the focus of the film is on Crippled Ho and Lee Rock, the film has no real good guys at all. As a matter of fact, all of the important characters are extremely bad guys with no remorse towards their actions. Aside from Ho and Lee, we have Kent Tong’s Ngan Tong, who starts out as Lee’s superior only to become his biggest rival within the ranks of the police force. Bryan Larkin’s Hunter is the notorious British officer who has a hatred towards Chinese and yet, he finds himself in a situation where he and Lee have to show some sort of respect towards each other because of their profession. Even Ben Ng’s Chubby switches gears from ruthless to benevolent to even more ruthless as it is he who seals Ho’s fate in the first half of the film.

Chasing the Dragon is a film that proves that one, Wong Jing can make some pretty good serious films; two, Donnie Yen can be a solid actor with dramatic chops; and three, just because a film is about gangsters, there don’t need to be any good guys and this is a film where all the important characters are notorious and if need be, ruthless.