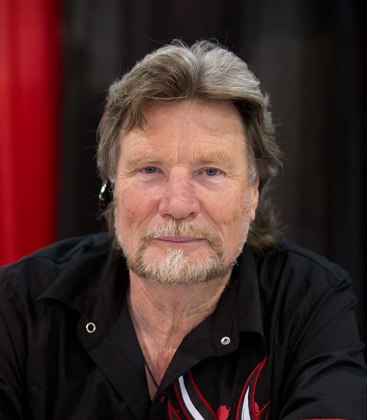 He is one of the most successful actors of a generation. Starting his career as a director then delving into acting courtesy of a breakout role from George Miller, Vernon Wells is one of the best Australian actors today. His penchant for playing mainly villain roles, Wells has also had roles where he didn’t always play such bad guys. From his breakout role as Wez in The Road Warrior to playing a corrupt detective in the film noir Trouble is My Business, Wells continues strong and his latest film, Impact Event, is now available on DVD and VOD from Wild Eye Releasing.

WorldFilmGeek had the chance to talk to Wells about not only this film but his career, which has made quite the impact for fans around the world.

Vernon, I am excited and honored to be talking with you as you are one of my favorite actors of all-time. Having said that, I got to see Impact Event and while you only made a cameo appearance, it still is a pretty good and fresh look at the possibility of an apocalypse.
Thank you so much! It was a lot of fun and while I was hired to do the film after everyone was already cast, I made the most of it.

Your character of Ed is the one who warns everyone about the meteor. How did you get approached for the role?
I worked with the director [B. Luciano Barsuglia] on another film, a Jekyll and Hyde style film where I played Hyde’s partner, another doctor. I had seen the script for Impact Event before shooting even began, but I was working on other films. I finally had a break and I contacted the director. I told him I was free if he still needed me for the film. So, he actually wrote the part of Ed for me and I went in and did the scene.

The film also had a cameo from Michael Berryman and for those who are familiar, you two have such a memorable scene in Weird Science. Do you two still stay in touch?
I’ve done a few other films that also had Michael but like this one, we didn’t appear together. I hope we do get to film together again as he is a good friend. We meet up at conventions and keep in touch. Sometimes, when there are films offered to me and there is a role I think he would be good in, I would suggest Michael to the director.

What I loved about that scene in Weird Science is that you and Michael, who are known for playing badasses, end up showing a more softer, sympathetic side once you are stood up to by the two main characters.
(Laughs) Yes! The crazy thing with Weird Science was that I originally didn’t want to play the role. It’s because by then, everyone knew me as Wez from The Road Warrior and I was worried about being typecast. However, my agent told me about John Hughes and his work in 80’s films that are about teen angst and they were major hit films. I knew then, I wanted to be a part of it. We had such an amazing cast on that film, such as Robert Downey Jr., and they were all really wonderful. Michael and I hit it off right away and we became instant friends and hopefully, we will get to work together in the same scene.

Did you get to see Impact Event and if so, do you have any favorite scenes?
Well, when I see a film, I like to look at the overall film. I agree, it is quite an interesting new look at the apocalypse. What’s funny is that any movie I am in, I tend to be a bit analytical about my performance and for the most part, I hated it. (Laughs) I kept thinking to myself, “Oh God, I was so bad!” Then, the fans come around and tell me how much they loved me in those roles. So, I said I might as well give up on analyzing myself. My worst critic is my wife. She would go, “Good Lord” on certain things. But, nowadays, I do enjoy doing the work and I did have a lot of fun with this one. But yeah, I like to look at films as a whole rather than break them down.

You’ve had an amazing career that’s still going on! While it’s been wow, almost 40 years since playing Wez, you’ve had amazing roles such as Commando and I have a soft spot for Shrimp on the Barbie. People think I’m crazy but it’s true.
(Laughs) That’s so good to hear! I really enjoyed making that one.

Are there any films you consider your favorites to make these days?
I recently did one called Trouble is My Business, a film noir film, where I played a detective.

Oh wow! I saw that just last week. Tom Konkle got me to see the film and I was excited to see you play the role!
Thank you! Tom and I did all our scenes practically together and we became good friends. In fact, once this whole pandemic is over, we’re planning to work again on a film called Island in the Sky. Tom’s an amazing filmmaker and this film will be a re-telling of Treasure Island and I will get to play the pirate in it.

Another film I really enjoyed is called Landfall and that was because I got to play a character who has all angles and sides. I like playing characters who are very developed and not just one-dimensional. This one was directed by Brian Martin, a filmmaker out of Seattle.

In addition to acting, I’m going back to directing. I really enjoy doing that. I started out doing that until George Miller thought I could do well as an actor. I really got to see how things are both behind and front of the cameras during my career. But, don’t expect me to direct myself because then I would be fighting with myself. If I’m directing, I would not want to work with the acting me because I can be such as a**hole (Laughs).

But what I love about acting is that I can give my ten cents in a role and they will let me do it because it’s not so much about hey, we have Vernon Wells here, but because the filmmakers think it can work within the film and that’s important. If I’m doing a supporting role, I don’t want to show up the main actors, especially the new ones. They should be given their due and I’m just happy to be helping out.

My oldest daughter is a huge Power Rangers fan and one of her favorites is Time Force where you played Ransik. What was the experience like?
That was such a fun experience! I was doing a film in Thailand and I discovered that the stunt coordinator, Koichi Sakamoto, was a producer on the Power Rangers series. I’ve never seen it before, but he suggested I try out for the character of Ransik in Time Force. I thought to myself, why not? So, I go in this room and there are lots of people trying out for the role and I thought, I’m not going to get it. But, I did the audition anyway and it went from all these people to down to two. Myself and a television actor. I still thought I wasn’t going to get it because they want a TV name, not a film actor. However, I did my final audition and the next day, they called me and told me to come in for a fitting. I got the job!

I didn’t meet any of the cast until the first day on the set. The first person I met was Erin Cahill, who played Jen, the Pink Ranger. We hit it off immediately and we got along so well. It was before long that the writers started writing more adult-themed episodes and my character went from this cardboard cutout with plastic to a more human character. He soon became a character who would do anything for his daughter. There was that episode where my daughter had a crush on the Green Ranger, and I became that overprotective father.

We all got along so well and here we are twenty years later, and we still keep in touch and meet up. When for instance, Erin and I go out to dinner, everyone shows up because we all became like a family. We even meet up at conventions because we all became friends from the show to today. I have to say it was one of the most fun experiences of my career.

That’s so awesome! Were there any films you got to finish before this crazy pandemic hit that you can talk about?
Yes! Landfall, which I mentioned earlier is coming out this week I believe. I did another two to three projects before this thing hit us. I did a horror film on a ship called S.O.S. which I think comes out later this year. I did a few short films as well.

One is called Fear of the Woods, which we originally shot in Sweden as a proof of concept for a feature film. However, the producers liked what they did so they added the visual effects and are making it a short film that will hit the festival circuit hopefully later this year. The other is a sci-fi film I did where I play a grouchy farmer who gets killed in the opening. It’s a 25-minute kitsch film that we hope will also play I the festival circuits.

I was shooting a Western a few months ago called Desert Sunrise, which I love doing because I love wearing the six-shooters and the Stetson hat (laughs). I think we’re planning to complete it at the end of this year because we need the snow for the setting. I also have another four or five movies planned. It’s funny because someone would come to me and say, you know you have 27 films set for release this year and I’m like really? (Laughs) I’m going to keep making movies as long as I get hired to either act or direct. It’s something I really love doing!

A Special Thank You goes to October Coast PR and Vernon Wells for making this interview possible.

3 thoughts on “An “Impact”-ful Career: An Interview with Vernon Wells”