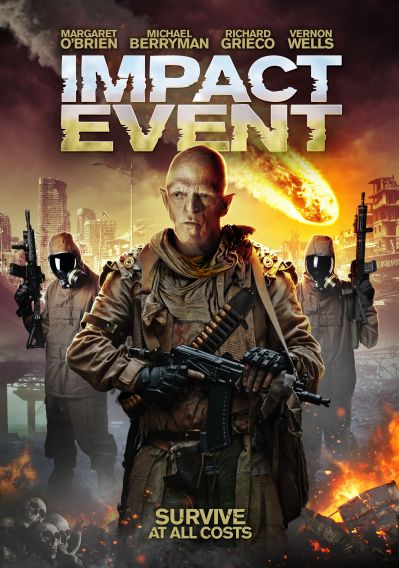 This indie sci-fi thriller takes a fresh approach with an apocalyptic setting and features cameos from some major names.

When a meteor is set to hit the planet, it is believed that this is no ordinary meteor, but one that will cause a massive impact of epic proportions. One that will decimate most the population of Earth. A group of people, Billy, Cassie, Ida, and Gordon are amongst those who decide to find shelter in an abandoned carnival funhouse with their only contact being that of ex-soldier Justice Outlaw. As expected, the meteor has hit and the four survive the blast.

Decked out in a hazmat suit in case of radiation, Barry heads outside and finds another survivor, Wendy, who is Ida’s sister. Wendy has been shot when she reveals that after the blast, people began to loot for supplies, and she was shot, and her parents killed. When Barry tells Ida what has happened, she is convinced that Wendy is still alive and attempts to run. The problem is that radiated gas has now entered the atmosphere and the slightest contact can kill. However, that will be the least of their problems when a band of deadly prisoners have escaped and intend to find a shelter and some food. Can these unlikely survivors become the heroes they need to be or will it be too late?

From the mind of filmmaker B. Luciano Barsuglia comes this sci-fi action-drama that does something a little different with its look at the apocalypse. When one thinks of the apocalypse, they think wastelands, people decked out in strange attire and lots of horror and action emerges. However, for this film, Barsiglia takes a more human approach to the possibility of what can happen. While major names such as Vernon Wells, Michael Berryman, and Richard Grieco are prominent on the marketing, they are relegated to more cameo roles but that doesn’t take away the fact that this is a pretty good movie.

Chris Giese really brings that sense of authority to the role of survivor leader Billy, who makes sure all of his efforts don’t go to waste. While at first, it seems like the first 15 minutes of the film after the opening credits seem much like a boring conversation, it is actually showing Billy as a true leader. Tasha Tacosa’s Cassie is someone who is hard-headed, questions Billy’s methods sometimes, but goes along with the plan when needed. Jed Rowen’s Gordon is an ex-soldier himself and when he finds him in a situation where he is forced to make a choice he never expected, he finds himself at first very scared at his decision. Ultimately though, he knows he will need him skills and tactics in the final act and having him do it in clown makeup makes him just a threat.

As for the big names, Vernon Wells plays scientist Ed, who is the one who warns everyone about the meteor that makes its impact. Richard Grieco has the very interesting name in Justice Outlaw, who we can assume is just a nickname or codename. Michael Berryman plays a benevolent but worried prison guard, Raymond, who comes afoul of our real villains, a band of implied cannibalistic prisoners led by Alpha, played by Hans Hernke, who plays it in a sort of Texas Chainsaw Massacre’s Hitcchiker kind of manner.

Impact Event is not a bad movie at all. It delivers a different perspective on the possibility of an apocalypse with some pretty good cameos from name stars. While some of the opening dialogue by our leader Billy can be cut down about a few minutes, overall, it’s not bad.