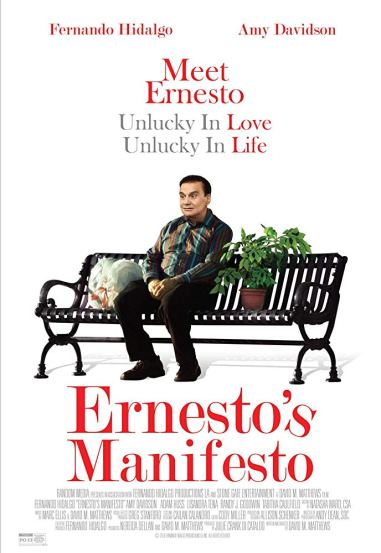 TV show host Fernando Hidalgo makes a hilarious film debut about a man’s road to redemption but not one that you would usually expect.

Ernesto Hernandez is having the worst day of his life. He’s been fired from his job as a waiter for two major fake claims. His girlfriend Veronica has changed to the point where she doesn’t need Ernesto in her life anymore. Therefore, she dumps him. To make matters worse, he is forced out of his apartment and must live in a hotel. What starts out as a new job as a waiter for another restaurant turns out to be a blessing in disguise when he befriends the owner, Jerry, who offers Ernesto to live in the guest house.

When Jerry passes away, Jerry’s friend and lawyer informs Ernesto that Jerry’s nephew has not been located and until he does, Ernesto can stay in the guesthouse while the house is rented out to director Austin, who is trying to get his movie made. When Ernesto and Austin instantly hit it off, at a screening party, Ernesto makes some suggestions to Austin and Austin decides to hire Ernesto as a member of his film crew. Ernesto soon meets make up artist Cassie and the two hit it off. Ernesto slowly begins to find himself again and there may be some bumps in the road, but for this man, things are beginning to look up.

Star and executive producer Fernando Hidalgo is a renowned Spanish-language TV show host who makes his film debut here as the titular Ernesto, a man who finds himself totally down and out but still sees things from a more carefree approach. Hidalgo is very funny in this film, especially due to his comebacks when he is asked something or is even confronted. This is the kind of carefree comic approach that clearly tends to be missed in a world where comedy today is more foul language and raunchiness. Ernesto is a more subtle man in a topsy turvy world and Hidalgo makes the role work perfectly.

The supporting cast are wonderful with the exception of a few characters in terms of how they treat Ernesto throughout his road to redemption. Amy Davidson and Adam Huss are terrific in their roles of new friends Cassie and Austin, who don’t see Ernesto as a problem but more of something they can help support as he supports them wholeheartedly. It is clear from the moment they meet that one can expect a little something more from Cassie when it comes to Ernesto.

Lisandra Tena plays Ernesto’s now ex Veronica, who comes off as someone who embraces change with a sense of cockiness. She thinks she is too good for him now and dumps him. She is seen as a cutaway during Ernesto’s road to redemption as part of her does miss him but finds herself more nouveau riche. And when it comes to these films, there has to be that one character you have to hate so much and that comes in the form of Sean Carrigan’s Kyle, Cassie’s boyfriend, who is the antithesis of Ernesto: conceited, egotistical, cocky, arrogant, stubborn, and derogatory to a degree. However, what’s great is that even though Kyle is the epitome of being a complete douchebag, when he confronts Ernesto, Ernesto isn’t scared off but more what he is: a likable fellow who will come up with the right verbal comeback.

In the end, Ernesto’s Comeback is exactly what comedy films need to return to nowadays. In this case, a likable fellow who takes a subtle approach to everything that’s thrown at him because “it’s just how he is”.