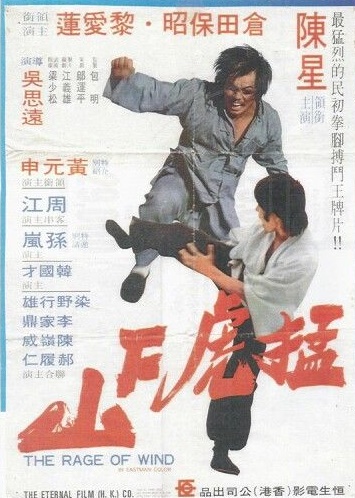 This standard basher with the typical movie rivalry between China and Japan is highlighted by quite a finale between Chen Sing and Yasuaki Kurata.

Chen Kwong  is a Chinese kung fu expert who returns home after living a life in the United States. He was the first Chinese man to win a Western boxing championship title. However, after accidentally killing his opponent in the ring, he made a vow never to fight again. Not all is lost as he met his wife Irene (Irene Ryder) while living in the States.
Returning home, he has learned that a legion of Japanese fighters live in the area. When they encounter a Chinese man’s body hung with the order that the body is not to be taken down for three days, Kwong puts himself in a dire situation.

Forced to use his skills, he becomes respected by Japanese leader Taka. Kwong earns the respect of his fellow Chinese townsfolk but Taka has notorious plans to use the fishing junks as a way to gain power in the territory. Kwong, with the aid of Irene and his nephew Wong, learns of the plan and decides to take action in an attempt to wipe the Japanese out once and for all.

When Jimmy Wang Yu’s The Chinese Boxer and Bruce Lee’s Fist of Fury were released, it started a major trend of pitting Chinese vs. Japanese in the classic kung fu genre. This film, which would be directed by future Seasonal Films founder Ng See-Yuen, seems like the standard basher film with the typical story of Chinese hero against Japanese villains. The issue with Kong Yee-Hung’s script is that it made Chen Sing seem like he would play the hero who, vowing never to fight again, would wait to use his skills until the end. However, not even ten minutes after his introduction scene and flashback, what is Chen doing? Fighting.

Despite the glitch in that archetype of story, Chen Sing does play it well as the hero of the people. He even goes as far as impressing the lead villain of Taka, played by Japanese martial arts action actor Yasuaki Kurata. However, Kurata’s character is more shady than he leads to believe and while he has some tough henchmen, played by the likes of Yukio Someno and Lee Ka-Ting, the one annoying henchman played by Suen Lam, has the word “sleazeball” written on his forehead with that evil smile of his. Irene Ryder does well as Chen’s wife, who is strong but doesn’t fight. She is the more talkative action type while Wong Yuen-San plays the concerned nephew who helps Chen take on the Japanese.

The uncle-nephew team of Leung Siu-Chung and Bruce Leung, along with Tommy Lee, choreographed the fight scenes of the film and they are of the “basher” method with lots of strikedowns, hammer fists, straight punches straight out of karate, and kicking. Bruce Leung and the late Jimmy Lee have a cameo appearance as two Chinese fighters who challenge Kurata in a pretty decent fight scene. The finale, which takes place of a beach, is the real highlight of the film with Chen taking on the likes of Kurata, Lee Ka-Ting, and Chow Kong in an attempt to end the Japanese from causing trouble.

The Rage of Wind definitely is a standard basher film, but it is a damn good one featuring Chen Sing and Yasuaki Kurata at the top of their game. Worth at least a rental.