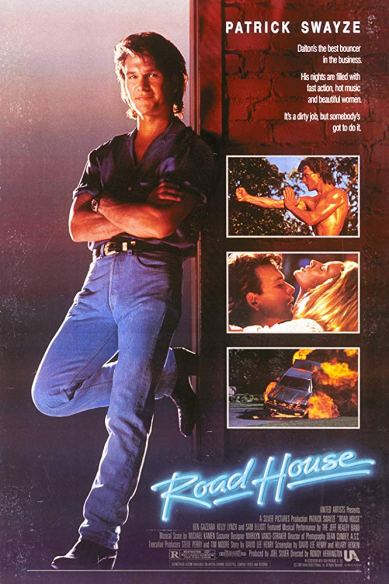 Patrick Swayze becomes a sort of cool one-man army in this 80’s cult classic that remains one of the late star’s most iconic roles.

Dalton is considered the best bouncer in the business, although he feels his good buddy Wade Garrett is the best. However, Dalton is known for his cool demeanor and he has been hired by Frank Tilghman, the owner of the Double Deuce, a bar in Jasper, Kansas, to help clean up the place. Tilghman feels Dalton is the only one capable of doing the job. Upon his arrival to the Double Deuce, Dalton learns that the bar is in desperate need of help. When Tilghman determines Dalton is in charge of whipping the staff into shape, trouble ensues.

After he fires bouncers Morgan and Steve, along with bartender Pat, he draws the ire of Brad Wesley, a major criminal boss in the small town who runs protection for all the local businesses in Jasper. While Dalton strikes up a romance with Dr. Elizabeth Clay, he still intends to keep his promise and clean up the Double Deuce. Wade, Dalton’s old buddy, even arrives to help Dalton. However, when Wesley unleashes more muscle and the lives of the people he cares about are now threatened to dangerous levels, Dalton decides to do what it takes to stop Wesley and his organization once and for all.

Thirty years after the initial release of the film, this cult classic still holds up as one of the great 80’s action films. The story of a bouncer hired to clean up a bar and eventually, the town the bar is located in, this film still remains one of the late Patrick Swayze’s most iconic films in his legendary career. While many fans will still yell Dirty Dancing, action fans will yell Road House with his role of martial arts fighting bouncer Dalton.

Swayze plays Dalton not so much a tough guy at first, but someone who is cool, calm, and collected. It is only when his buttons are pushed to the limit that he unleashes his fighting skills. The calm and collected Dalton shows that demeanor when challenged to a fight in the film’s opening sequence only for him to walk back into the bar after kicking the rowdy patrons out. He even shows off some Tai Chi moves in the film as he is seen one morning at the lake near his new home doing a form.

Along the way, we see Dalton both fall in love and help clean up the local bar, making it go a 180 from dirty and dingy to one that’s more clean and welcoming. This may remind some viewers of an episode of Bar Rescue but with butt kicking along the way. Kelly Lynch is great to watch as Dalton’s love interest, the local doctor who becomes concerned when she feels her new man has gone too far in his “cleaning up” while Sam Elliott rocks it as Wade Garrett, a legend like Dalton, who is only calm and collected when he wants to be and kicks tail when he wants to. As for Ben Gazzara, he is sly as the criminal mastermind Brad Wesley, who attempts to lure Dalton to leave town and goes to great lengths to make sure Dalton does what he wishes but to no avail.

Legendary kickboxing champion Benny “The Jet” Urquidez, who makes a small cameo as a Wesley onlooker during a car dealership destruction scene, personally trained Swayze in martial arts and served as the film’s fight director. While the film has the likes of stunt legend Anthony DeLongis as knife-booted thug Ketchum, who Dalton feels is “too stupid to have a good time”, the highlight is the fight that pits Dalton and Wesley’s number one man, Jimmy Reno, played by Marshall Teague. This fight brings to mind the kickboxing-style of action seen in Hollywood films during the mid-80s to early-90s. Some of the backstory behind this particular fight is quite a shock, including Swayze getting mistakenly hit with an actual log by Teague as opposed to a prop log and fight trainer Urquidez telling Swayze that he could make it as a professional kickboxer because thanks to his dance background, Swayze did have those moves.

Road House remains an 80s cult classic that still holds up three decades later with the late Patrick Swayze being nice and kicking butt. It is worth checking out if you are into a fun 80’s action film.