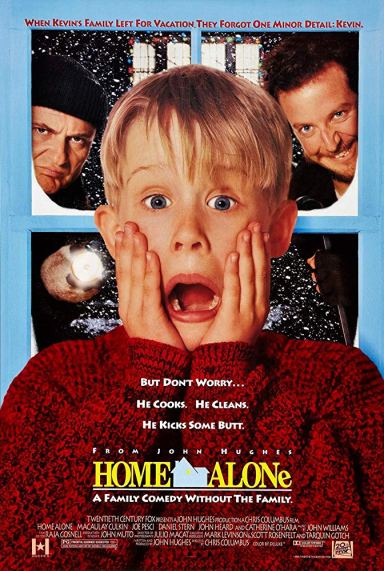 Macauley Culkin gets his breakout role in this classic holiday comedy in which he outwits two bumbling robbers in the most hysterical manner.

Kevin McCallister is an eight-year old boy who feels like the runt of the family. Always bullied by his siblings, the holidays are nearing and Kevin, along with his extended family, are planning a vacation to France. However, on the night before they are set to leave, Kevin gets upset when his older brother Buzz purposely takes the last of cheese pizza, causing Kevin to get angry and cause a scene. Having embarrassed the family, Kevin is forced upstairs for the night.

The next morning, the family has scrambled to head to the airport, but one little problem. Kevin has been left behind. Kevin takes advantage of being home alone, having fun and even going as far as teaching himself the household basics. However, two bumbling robbers, Marv and Harry, has decided to target the McCallister home as their target. When Kevin realizes what is planning to happen, he makes a decision to protect the house and create a series of booby traps to stop the robbers. Meanwhile, upon learning their mistake, Kevin’s mother Kate has decided to do what it takes to get home to Kevin while the rest of the family waits at the airport.

One of the great modern Christmas classics, this is one of the funniest comedies that still holds up today. Not only did it become a breakout role for Macauley Culkin, but it also became a welcome departure for Joe Pesci, who is used to playing gangster roles. The legendary John Hughes wrote this film and not only focused on the antics of our hero Kevin, but in a somewhat bold but rightful move, brings the character of Kate as a pivotal one as she does what she can to return to her son on Christmas after making a heck of a blunder.

Based on the classic Edvard Munch painting “The Scream”, the pose would be the iconic thing that Culkin would be, and is still known for as he emulates it on numerous occasions throughout the film. What makes the film also interesting is that Kevin goes from madcap and joyful, loving the fact that he is home alone, to a responsible kid who despite one small incident shows that responsibility. Of course, being childlike, he resorts to doing what he has to do to stop our bumbling robbers Harry and Marv. While Harry is the more level headed of the robbers, this allows Pesci to get his comedic chops in as his chemistry with Daniel Stern’s Marv is great. In addition, Stern lets off some over the top but rightful reactions in the hilarious climax of the film.

Catherine O’Hara is great to watch as Kate, going from parent to irresponsible adult, an ironic twist considering Kevin goes from irresponsible child to responsible. At first, it seems like Kate could be the mother who shows discipline only to act on that irresponsibility when she accidentally leaves Kevin behind. This is where Kate worries and becomes the secondary subplot of her journey to return to get to Kevin. Her reactions to the incident are genuine and even takes advantage of having an emotional range when she comes across a cameo appearance by John Candy as a polka king who helps her on her travels.

The piece de resistance is the climax where Kevin protects the house from the robbers. The booby traps are so original and just get the best of Harry and Marv. This allows a physical style of comedy that brings back the days of slapstick comedies of the Golden Age of Hollywood and brought to the modern era in a fun way. Of course, an incident revolving around Kevin resorting to using his brother’s tarantula as a means to stop one of the robbers shows the most hilarious and priceless reaction perhaps in the history of modern comedy.

Home Alone still holds up as a modern day Christmas comedy, thanks to the antics of Macauley Culkin as he is both having fun and becoming the protector of the home, showcasing hilarious comedy from Joe Pesci and Daniel Stern. One of the all-time greats today.