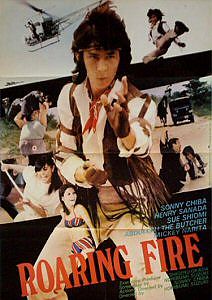 Japanese star Hiroyuki Sanada takes the spotlight in this 80’s action film that sometimes has borderline madness, but it is an overall action filled ride for revenge and honor.

Joji Hibiki is a Japanese-born Texas-raised rancher who thrives on the land. However, his life changes when his father is on his deathbed and the shocking truth about him is revealed. Joji learns he was kidnapped as a young boy and taken to America. His real name is Joji Hinoharu, the heir to a fortune along with his twin brother Toru and sister Chihiro. The Hinoharu parents were killed three years ago in a plane crash and reports have indicated that Toru has been gunned down in Hong Kong. Joji decides to make his way to Japan to find out everything.

Upon his arrival, Joji meets a pickpocket who takes him to the old Hinoharu house, now run by another business. However, news of his arrival at first mistakes him for the dead Toru. However, when everyone learns the truth, the attention eventually makes him both a target and a liked person by some of the locals, including Reika, who works for Joji’s uncle, and the hulking Spartacus. Joji eventually meets Chihiro, who has been rendered blind since the age of nine and has learned martial arts through soundwaves. However, Joji soon learns why Toru has been murdered and with him and sister next in line, Joji will have to use his wits and martial arts skills to stop those responsible.

From the team who brought you the Street Fighter series, and no, we don’t mean the Capcom video games, but the 70’s Japanese action films starring the amazing Sonny Chiba comes this spotlight film for Chiba protégé Hiroyuki Sanada. Sanada plays two roles in the film. He appears in the opening as doomed twin Toru, who is viciously gunned down by the Hong Kong syndicate. However, it is his central role as Joji that gives him the edge. The opening credits showcase what happened to our hero as a kid to an adult, learning the ways of both being a cowboy and learning to throw tomahawks as a result of a friendship with Native Americans.

Etsuko Shihomi brings a different dimension to her usual action-filled role as Chihiro, the blind sister of our hero and twin brother. Chihiro relies on simply the wind and sound to find her adversary, which allows her to strike both empty-handed and with weapons. Mikio Narita brings a duality to the role of Uncle Ikeda, who starts out sympathetic but one can only guess his true nature and of course, it comes to no surprise that he is the villain of the film, leading up to some pretty insane confrontations in the forms of two highlight chase scenes and a very over-the-top performance in the form of Ikeda’s moll, who in one scene dresses up like a member of some nouveau-member of the Third Reich, telling our hero and his ally Reika, “Welcome to your Auschwitz weekend”. Talk about madness.

The legendary mentor to Sanada, Sonny Chiba, makes the most of his appearance as the wonderfully named “Mr. Magic”, a ventriloquist who uses his act to inform our hero of the truth involving his uncle and his true identity is somewhat what many would expect. The film also makes good use of professional wrestling legend Abdullah the Butcher, who plays the marvelously named Spartacus, who starts off as an adversary, but soon befriends Joji off hand and helps him in part of the first chase scene of the film involving our hero and his friends being chased by Yakuza thugs and ninjas, the latter of which ends quite hilariously.

Chiba’s action set pieces allow Sanada and crew to showcase some impressive martial arts skills, even with the use of some wirework. Sanada evades attacks sometimes like something you would expect in Hong Kong films. Surprisingly, he would make his Hong Kong film debut that same year with Ninja in the Dragon’s Den, Corey Yuen’s directorial debut. Sanada has some great kicking skills as well as gets to showcase those skills against many skills while Shihomi is able to showcase her skills in two action set pieces. However, it is clear that this is Sanada’s show and even Chiba is willing to take a seat back for the sake of his protégé, showcasing a bit of comic relief in his first scene followed by just being there but not without one small action scene. That may not bode well with some of the hardcore Chiba fans, but he is willing to accept that for the sake of highlighting Sanada.

Roaring Fire is definitely an excellent Japanese 80’s action film that shows Hiroyuki Sanada in top form. Those who are fans of his today and want to see some of his early work should without a doubt check this one out.