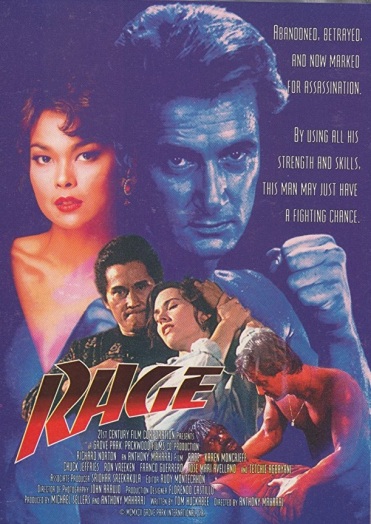 25 years ago, thugs have gunned down an American couple in Thailand, leaving their son Jack orphaned. Taken in by a prominent family, Jack was raised by Mr. Chang and begins training in the martial arts along with his new brother. Flash forward to the present. Jack is married to wife Sarah, who has become the first foreign-born lawyer to be appointed in Thailand. Jack has been helping run his adopted father’s business for years and when he learns he will be made the new CEO of the business, this does not bode well with Jack’s brother Chiang.

Chiang had hoped to use the business as a cover for his real operation, drug running. In the meantime, Chang holds illegal martial arts matches known as Deathfights to earn more money. His current champion is the Jamaican warrior I-Ron. Chiang vows to get even with Jack and does so by killing Jack’s assistant Noi and framing Jack for the murder. When in prison, Jack makes a startling confession to Sarah. Jack had an affair with Noi and Chang knew about it, making Jack a prime suspect in Noi’s death. When he is released from prison, Jack has one week to clear his name and to do so, he must enter the Deathfights and take on his brother. However, before he can take on his brother, he must take on various fighters, including Chiang’s champion, I-Ron.

Having worked as a stuntman and action star for many years, Richard Norton has worked alongside some of the biggest names in action. Here, Norton takes the lead role of a businessman forced to clear his name by entering the illegal martial arts fights run by his adopted brother. Norton truly shows why he can work well with any script, no matter how terrible it is. Tom Huckabee’s script seems to have the cliched B-movie feel, but what he did make good use of is Norton’s character. While Jack may be the hero of the film, his confession of having an affair with his assistant makes his character more flawed than most action heroes of the B-movie game.

Norton and real-life buddy Ron Vreeken were responsible for choreographing the film’s fight sequences. While Norton, a karate stylist himself, looks great, it is Chuck Jeffreys who really stands out in his scenes as Deathfight champion I-Ron. Jeffreys, a wushu stylist, gets to use his agile kicking and acrobatic skills to good use. The fight scene between Norton and Jeffreys stands out as the best fight of the entire movie. Even the final fight between Norton and Franco Guerrero wasn’t as great yet it holds its own as not too bad.

Rage is a not too bad Richard Norton film. While a flawed action hero does make a good movie, the script still isn’t the best but makes good use of Norton and Ron Vreeken’s fight choreography. Worth possibly a rental at least.