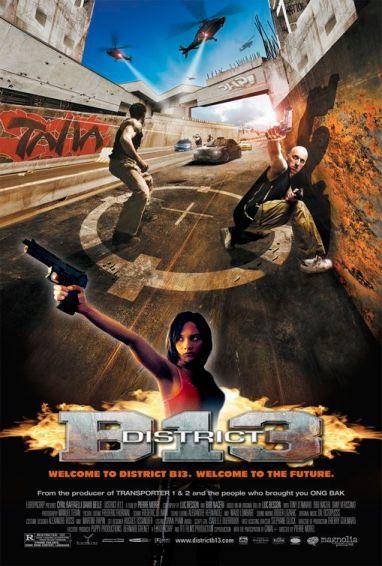 Luc Besson, the man behind the films La Femme Nikita and The Fifth Element amongst others, wrote the screenplay for this amazing action packed film that highlights the free running art of parkour, and its creator, David Belle.

The title of the film refers to a lowly district outside of Paris, which has been plagued with gang violence. It goes so bad that there is no government, no police, and no schools. However, it is the home of Leito, a loner who only cares about one thing: his sister Lola. When Leito learns that Lola has been kidnapped by local crime lord Taha because Leito refuses to let drug dealers near his place, he intends to take Taha down.

Six months later, a bomb has been placed in District B13 and it is up to Damian Tomaso, a tough as nails Parisian cop, to enter the area and find the bomb. It is no sooner that Damian and Leito find themselves on the same page as the bomb was stolen by none other than Taha. Both Leito and Damian have special skills that enable them to take on the bad guys. This becomes a highlight reel for the amazing art of parkour, a style that involves scaling buildings with no use of wires and jumping from rooftop to rooftop as well as martial arts courtesy of Raffaelli, who gained a following after his impressive performance in Besson’s 2001 thriller Kiss of the Dragon opposite Jet Li.

While Besson is credited with co-writing the screenplay with co-star Larci “Bibi” Naceri and producing the film, the film was directed by Pierre Morel, who got his start as a cinematographer who worked on the first installment of The Transporter trilogy. For his directorial debut, Morel used his expert sense of cinematography with director of photography Manuel Teran to showcase the action sequences, choreographed by Raffaelli. The film made great use of its locales and buildings that were used for Belle’s and Raffaelli’s parkour skills.

As much as many movie viewers may see this as a routine action thriller, Besson has always been known for giving quality entertainment. With the success of The Transporter and Kiss of the Dragon, Besson wrote this film just for Belle and Raffaelli. Belle and Raffaelli both got their starts as stuntmen and bit players, but this film helped put them on the map as worthy lead actors. Both men have the acting skills and the action skills to carry the film and it succeeded. It did so well that a sequel, District B13: Ultimatum was released in 2009 and a U.S. remake, Brick Mansions, which would be the final completed film of late actor Paul Walker, was released in 2014.

The only flaw of the film is that there wasn’t enough villains who had the tendency to match the skills of Belle and Raffaelli. Taha is the sly crime lord who just sits around and lets his men do the work. His number one man, K2, is a big man who relies on two things, his gun and big mouth, to act like the big shot. The other villains are played by parkour artists, but they are there basically to look foolish and get beaten around by Belle and Raffaelli. Another villain comes in the form of a wrestler like guy who absorbs Raffaelli’s kicks and only gets defeated when Belle uses his parkour skills to tie a rope around the big oaf. They needed to have a worthy opponent or two to make some of the action scenes a little more interesting.

Despite the lack of “worthy opponents”, District B13 is still a fun film to watch, especially to see the art of parkour in full effect.