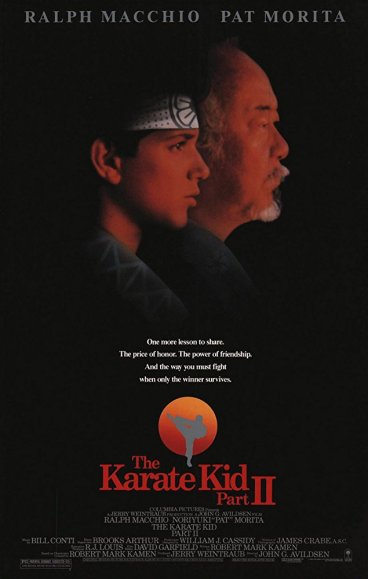 The “Karate Kid” and his teacher go on another adventure, this time to Okinawa, the birthplace of Mr. Miyagi. There, more trouble awaits.

After winning the All-Valley Karate Championships and earning the respect of his former bullies, Daniel Larusso is preparing for his senior prom. However, he learns that his girlfriend has dumped him to return to a college football player. Daniel’s teacher and friend, Mr. Miyagi, has learned that something terrible has happened in Okinawa. His father is dying.

Mr. Miyagi makes the decision to go back to Okinawa. Daniel is given the chance to go with him and together, they embark on a new adventure. There, Miyagi meets old rival Sato, who fought Miyagi a long time ago and has always wanted revenge. While Miyagi resists Sato’s offers, he also reunites with a childhood love, Yukie. Meanwhile, Daniel meets a girl in Kumiko and finds a new enemy in local bully Chozen, Sato’s nephew who uses his uncle’s power to act like a bully.

When Miyagi and Sato finally agree to settle their score, a typhoon hits. When Sato is trapped under a falling log, Miyagi is able to help him. This action soon causes Sato to realize that Miyagi is actually a honorable man and the two rekindle their friendship. However, when Daniel attempts to save a girl, Chozen refuses to help Daniel and Sato disowns him. All things come to ahead at a traditional dance as Chozen intends to confront Daniel once and for all.

What is very interesting about this sequel to the classic 1984 film is that the focus shifts from the bullied student to that of the mentor. Writer Robert Mark Kamen wisely concentrates more on Miyagi as a man who has his own problems to deal with here. Miyagi must deal with his dying father and facing an old friend turned enemy in Sato. However, we also get to see Miyagi’s sensitive side when he rekindles his romance with childlook love Yukie.

While the main focus of the film is Miyagi, we get to see Daniel go from heartbreak to starting a new adventure in Okinawa. He continues with his martial arts training with Miyagi and finds romance with local girl Kumiko. He also finds a new enemy in Sato’s nephew Chozen, who seems okay at first but soon his true colors are revealed. Yuji Okumoto, who would later appear in more action films, is quite good as the new nemesis of the Karate Kid.

What is even more astounding with this sequel is that it picks up where the last film ends. Originally written to end the film was a small defensive battle between Miyagi and Sensei Kreese of the Cobra Kais after Kreese bullies his star student, Johnny, reprised by William Zabka. Of course, Kreese would return for his revenge in the third installment in 1989.

Nevertheless, The Karate Kid Part II is definitely a worthy sequel. While it shifts on the focus of the teacher this time around, the student is still there and doing what he now does best.