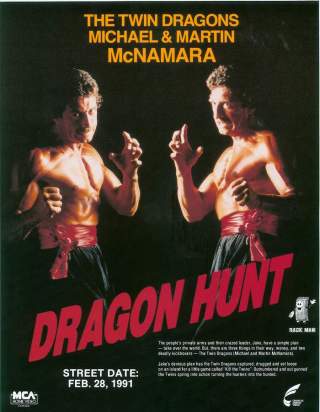 Canada’s “Twin Dragons” are back in this action packed sequel to their film debut as they go from being hunters to being the hunted.

Mercenary leader Jake is seeking revenge against the Twin Dragons, martial artist brothers who had stopped him from taking over a small island. Jake lost his hand as a result of their last encounter and has hired an arms dealer to give him the firepower to deal with the brothers. He comes up with a plan to get the brothers back on the island and hires his goons to lure the Dragons back to the island where they had their last battle.

Mic and Martin are knocked out, drugged, and captured by Jake. Jake comes up with the idea to make the twins the hunted in a sick and twisted game called “Kill the Twins”. As Mic and Martin find themselves hunted down by not only Jake and his men, but anyone on the island. Mic and Martin must use both their martial arts and survival skills to take on all comers. With nowhere left to turn, the twins must now become the hunters once again and stop Jake and his men once and for all.

Martial arts twins Michael and Martin McNamara return for what would be their current final film, self-produced and financed through their Twin Dragon Film Production. The film is a direct sequel to their 1986 debut film Twin Dragon Encounter and once again pits the twins against the army led by Jake, played by the marvelously named B.Bob, who now sports a metal hand due to his previous encounter. If Bob overdid it with his performance in the original film, he amps it up in the sequel, even having two female accomplices along with his usual goons.

While the original film had sporadic action pitting the brothers against various opponents, the sequel amps up the action allowing the brothers to once again unleash their kung fu skills as well as using survival skills to take on not only the army goons, but other types of opponents including ninjas and even poachers. Look out for former world kickboxing champion Curtis Bush in two roles, one as a poacher and one as a ninja. The finale truly is fun even though it is clear we have a B-movie level of the home video market glory days. It does end with a twist that one may never expect but still fun nevertheless.

Dragon Hunt brings more action from the McNamara Twins as they once again showcase their martial arts skills in a survival setting. The villains amps up him over the top performance but let’s face it. It’s a fun Canuxploitation action film that must be seen from cult film fans.

The film is available to purchase through the Twin Dragons website store but be aware it is Canadian Dollars.