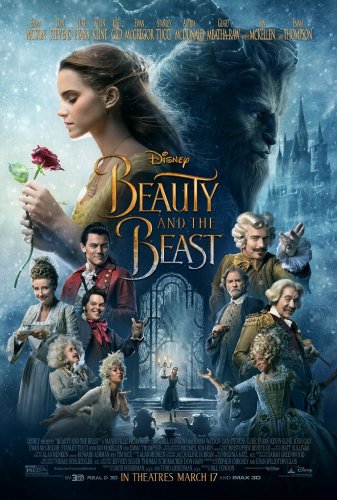 The 1991 Academy Award-winning Disney film gets a live-action treatment that is just as good as its animated counterpart, with a few new twists and turns that actual mesh well.

When an arrogant prince drew the ire of an old hag during a costume ball, the old hag is revealed to be an enchantress and she turned the prince into a beast and turned all the servants into household objects. The only way the beast could be turned back to normal along with the castle, is to find true love and to ensure it will happen, the enchantress puts a rose in a glass case and the beast must find true love before the last petal falls.

Belle is a young book-loving woman whose father, Maurice, is an inventor. Belle has been the object of affection of Gaston, who has returned from the war and is a very arrogant and cocky fellow. Gaston is always refuted by Belle, but he is still determined. However, a fateful night where Maurice meets the Beast, Belle arrives and offers herself to be the prisoner in place of her father. The Beast agrees and keeps Belle in his castle. Belle and the Beast soon learn that even in their situation, there is a chance for these two to actually fall in love. That’s if the Beast can learn to be tamer and not continue his animalistic ways.

With Disney’s recent takes on turning some of their beloved animated classics into live action features, after the success of Alice in Wonderland, The Jungle Book, and Pete’s Dragon, this latest live action adaptation, of the 1991 Academy Award winning film, is truly one of their best films let alone a live action masterpiece from the Mouse House. The elaborate set pieces are just the beginning and staying true to the musical masterpiece of its animated original, Bill Condon once again shows why he is a top director of this genre of film.

The film’s driving force is the ensemble cast led by Emma Watson as Belle and a mo-cap Dan Stevens, who also provides the voice of the Beast. The CGI looks quite convincing that one may at first think it is Stevens under make-up but surprisingly that’s not the case. Their chemistry is ecstatic in the film from their bickering to love story with the great dance scene that is the highlight of the film.

The cast of eclectic characters within the castle are quite a hoot as well, notably the bickering Cogsworth and Lumiere, played by Ian McKellen and Ewan McGregor. In a twist to the story, a new character, Cadenza, is a grand piano voiced by the always great Stanley Tucci. Emma Thompson truly lives up to Angela Lansbury’s legacy in the iconic role of Mrs. Potts, especially when she belts out the titular song.

Luke Evans is quite fun to watch as the arrogant Gaston and seems to be having fun with a role that requires someone of Evans’ “tough guy” role character with Josh Gad as LeFou, whose revelation caused some controversy. However, Gad, like Evans, is having fun with the role and the so-called “controversial scene” literally lasts two seconds, so even if it is considered controversial, it is really no big deal in today’s world. Their rendition of the “Gaston” song is quite fun to enjoy watching. Kevin Kline makes the most of his role as Maurice, even when it is minimal like its animated original.

The live-action version of Disney’s take on Beauty and the Beast truly is as good as its animated original. With some great chemistry between Watson and Stevens and the very great ensemble cast, it is truly a wonderful film for all to enjoy…in other words, “be their guest” and see this film!