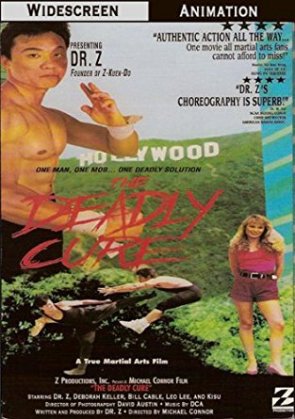 Jeet Kune Do and medicine expert Dr. Zee Lo makes his film debut on this 1990’s shot-on-video action film that brings a bit of homage to JKD founder Brue Lee.

Thirty years ago, Eddie Lee was creating a new drug but has not completely perfected it. Despite the imperfection, crime boss Wu Feng demands Eddie give him the drug. When Eddie refuses, both he and his wife are killed by Wu Feng and his men. The lone survivor is young son, Billy, who grows up to become a doctor with an expertise in medicines and has dedicated his life to coming up with a way to combat the drug, which has caused an epidemic for the past thirty years.

While Billy has succeeded in testing on an individual basis, the State Department wants the remedy, but Billy has to learn how to actually make it for a citywide basis. With help from student and new assistant Susan, Billy finally discovers the secret to making the remedy. However, when word gets out of his discovery, Wu Feng plans to have the remedy destroyed as it will ultimately hurt his business. When Billy is under constant threat, under the advice from a local priest, Billy must begin training in martial arts as he learns it will be the only way to stop Wu Feng and his men.

Dr. Zee Lo is quite an interesting figure. A student of Ted Wong, himself a student of the legendary Bruce Lee, Lo is well versed in Jeet Kune Do and even Chinese medicine. In the 1990’s, Lo made the decision to make films and self-finance his own films without the help of any big studios. This film marks his debut in the world of martial arts action films. The interesting thing is that the film is shot-on-video, so having something extraordinary may not exactly be in the works circa 1993.

The film involves not only a revenge story of sorts, but more about the hunt for a remedy to an epidemic. Lo plays two roles in the film. He is seen in the opening as the creator of the drug who starts the epidemic unintentionally and dies for his refusal to give up the drug to our lead villain. The central role however is that of the drug creator’s son, who goes to great lengths to find a cure for the drug. Having found the cure, he becomes a target and thus, must learn martial arts to take on the villains. Deborah Keller does okay as Susan, Billy’s assistant/love interest, who acts as a typical damsel in distress. Leo Lee, who many will later know as Master Pain in Kung Pow: Enter the Fist (with Lung Fei in the classic footage), is vicious as Wu Feng.

Dr. Z, as Lo is also known as, also choreographed the film’s fight scenes. It must be said that the training sequences are actually pretty decent and as for the fight themselves, they are what one would expect in a low-budget shot-on-video production. However, with Lo having the lineage of Lee himself, it is quite fitting that Lo pays homage to Lee by using mainly Jeet Kune Do himself in the fights. One such fight scene has Lo using a more grounded assault against Undefeatable villain Don Niam. Lo even pays a bit of a tribute to the Lee-Dan Inosanto nunchaku fight from Game of Death in one fight scene. The film’s action starts out light, but in the final act, it’s all Lo against all.

The Deadly Cure may not be on the level of classics and modern day martial arts films. However, for a shot-on-video self-financed 90’s film that pays homage to Bruce Lee, it’s not a complete disaster. It’s actually an interesting debut for Dr. Zee Lo, who continues to make his own films to this day.

This film is available to buy at ReelAsianFilms.com, Dr. Z’s film distribution company.