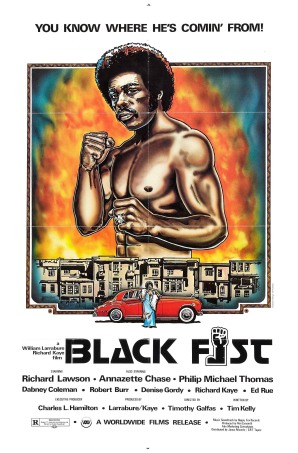 A very interesting entry in the world of Blaxploitation films, this one is revealed to have a shocking revelation, which could described the constant use of fade ins and fade outs throughout most of the film.

Leroy Fisk is a man in Los Angeles trying to earn a living for his family. He ends up working as a fighter for local mob boss Logan, despite the fact that he is more or less a racist. However, Leroy only does it because of the money so he can provide for his family. He hopes to get out in the game once he has enough money to put a down payment on a nightclub. When Heineken, a racist cop, forces Leroy to cut him in on the money he makes from the fights, Leroy knows he doesn’t have a choice. He soon learns that Logan and Heineken are in cahoots with each other.

When Leroy decides that one more fight can get him the money needed for the club, he accepts and defeats Logan’s big heavy Moose. Adding insult to injury, Leroy smears Logan on top of Moose’s bloody body. Logan, very upset by what has transpired, decides that since Leroy won’t continue to fight under him that he must be eliminated. However, when a car bomb kills Leroy’s wife and brother-in-law instead of Leroy, the fighter is now seething with revenge. With the ally of family friend Florence, Leroy begins his plan to get revenge on the mob once and for all.

Directed by Timothy Galfas, this has an interesting distinction of at first being a rare film until it ended up in the public domain. With the constant fade ins and outs and the changing of Leroy, one must wonder whether this is a straight film shot all at once. The answer finally was revealed a few years back by the film’s lead actor himself, Richard Lawson. This could also explain why the future Tubbs from Miami Vice, Philip Michael Thomas, plays two pimps, an African-American named Fletch and then a Latino named Boom Boom.

Lawson revealed that the film is actually a combination of a 1974 entitled Bogard and a film later made by producers entitled Get Fisk. Bogard was originally rated X for some apparently edgy sex scenes but it was revealed that the producer had used illegal means to finance the film so producers William Larrabure and Richard Kaye would get that film and splice it with new footage, hence Kaye is constantly credited for his work here on “additional scenes”. One can only guess those “additional scenes” involve Dabney Coleman (sporting a full head of hair) as the racist cop Heineken and Robert Burr as mob boss Logan.

Lawson makes good use of the splicing as the hero Leroy Fisk, who is only looking to make enough money to provide for his family. However, the only thing he has are his fists, which he uses in street fights. Lawson may not have the build of a Blaxploitation hero of that era, but he proves his own mettle when it comes to the fight scenes, which take up most of the first half in terms of action before it delves into a typical Blaxploitation revenge flick.

The action scenes are not of the martial arts variety but more of a bare knuckle style fighting that has been seen by the likes of Clint Eastwood and adapts to a more boxing-style action then the film becomes more of a street style used especially in the scene when Leroy, on his quest for revenge, proceeds to beat down Boom Boom in the bathroom. This particular scene would come in an hour into the film and would be the scene that would be the film debut of Hollywood veteran Edward James Olmos as a junkie going to the bathroom as this particular fight continues.

Black Fist may be somewhat a cut and paste film, but surprisingly it works out well in certain spots and has an ending that isn’t very clear and it seems like for this fighter, that just might be okay…or not.