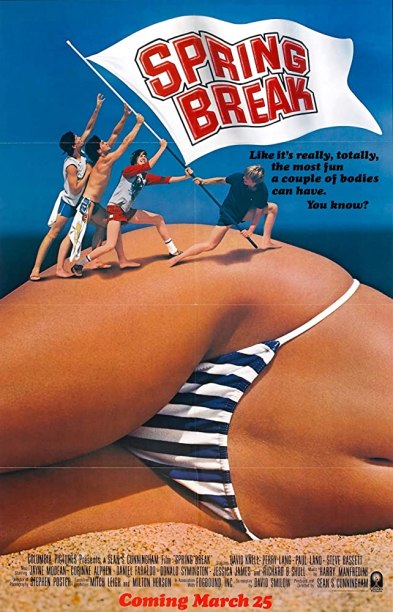 The annual party in Florida sets the stage for two unlikely groups of buddies who come together in this classic 80’s comedy.

It is time for Spring Break in Fort Lauderdale, Florida. For best buddies Nelson and Adam, it’s about having fun at a time when Nelson has ditched his stepfather’s campaign for political office. When they arrive at the Breeze n’ Seas Motel, they are met right away with glee from hotel owner Geri and hotel worker Eesh. Shortly after, Stu and O.T. arrive from Brooklyn with hopes of making the most out of their vacation as well. However, due to a mix-up and overbooking, Nelson and Adam find themselves in the same room with O.T.

After spending some time together and bonding, the four guys soon become best friends and they go out and about on the town. As they enjoy the bright lights and fun of Spring Break, Nelson finds himself in love with Ohio college student Susie and O.T. finds himself in love with Joan, a woman he sees randomly only to learn she is the lead singer of local band Hot Date, who perform at Penrod’s. However, the fun comes crashing down when Nelson’s stepfather, determined to get his office seat, learns of Nelson’s whereabouts and has plans to destroy not only his Spring Break, but his close friends as he plans to buy the hotel in an effort to get his power known. Will Nelson, who has always been scared of his stepdad, finally muster up the courage to stand up to him and end Spring Break on a high note?

From the director who brought you the original Friday the 13th, Sean S. Cunningham decided to capitalize on the rising teen comedy genre film that was rising due in part to Bob Clark’s seminal hit Porky’s just two years prior with its sequel being released the same year as this film. What’s great about this film is that it minimizes the “sexcapades” and revels in a story about friendship between the unlikeliest of guys at a time where clichés were so profound. The friendship between protagonists Nelson, Adam, Stu, and O.T. is the driving force of this film as it starts out strange but thanks to Stu and O.T.’s positive attitudes, it is their attitude that transfers onto Nelson and Adam, who decide to revel in the fun despite Nelson’s misgivings involving his stepfather.

The core cast is just amazing and all show different personalities that make the film work. David Knell personifies Nelson as a nerdy-like character who despite having his own set of misadventures, ultimately finds himself gaining the courage to have fun, even if at times, it is alcohol-fueled. Perry Lang’s Adam is the crazy guy of the bunch with his monologue to Nelson about what Spring Break is all about has to be one of the greatest lines in comedy history. Paul Land’s Stu is clearly the “stud” of the bunch as we see him at every opportunity with a new woman by his side and yet, he still remains loyal to his friends. Steve Bassett’s O.T. is the tough guy and at times, very funny guy of the group. His scene in a diving contest is classic and his random meetups with Joan, played by Corinne Alphen, make quite both comic relief and crush come to life.

The supporting cast is wonderful too. Aside from Alphen, who actually lip-syncs Hot Date’s song (yes, they were a real short-lived band from Fort Lauderdale), Jayne Modean brings that girl next door look at Susie, who would be Nelson’s love interest. Jessica Jaymes has a motherly sense as motel owner Geri, who warms up to the buddies from the get-go while Daniel Faraldo’s character is quite funny and has the best name of a character ever in…Eesh!

The film also has its fair share of villains, notably Richard B. Shull’s conniving Eddie, who is revealed to be Geri’s brother-in-law who is involved in the master plan of Ernest Dalby, played by Donald Symington. The stepfather of Nelson, Ernest spends most of the film getting all angry, demanding to know the whereabouts of Nelson and hides his ulterior motives from Nelson’s mother. There are also Ernest’s two assistants, who roam about the city looking for Nelson much like the way four years later, we see Forest Whitaker and Norman Burton tracking down Jean-Claude Van Damme in Bloodsport. The finale itself is quite a fun mix of action and comedy, as we see the buddies doing what they do best even in the more dire of circumstances.

Spring Break is a fun and wild time of a movie, focusing much on an unlikely bond between two sets of friends as they go above and beyond in a time of need all throughout the course of the titular event.