A very talented actor, Craig Fairbrass has had his share of well-known roles, from a 2-year stint as Dan Sullivan on the hit British series EastEnders to his first major gig as Delmar in Cliffhanger followed by a stint as an indie actor in Hollywood and his most recent run as real-life gangster Pat Tate in the Rise of the Footsoldier franchise. After a most recent appearance as the lead villain in Jesse V. Johnson’s Avengement, Fairbrass stars as a man on a rocky road to redemption in Villain, coming to VOD and Digital on May 22 from Saban Films.

WorldFilmGeek had the pleasure of talking to Fairbrass about his latest film. 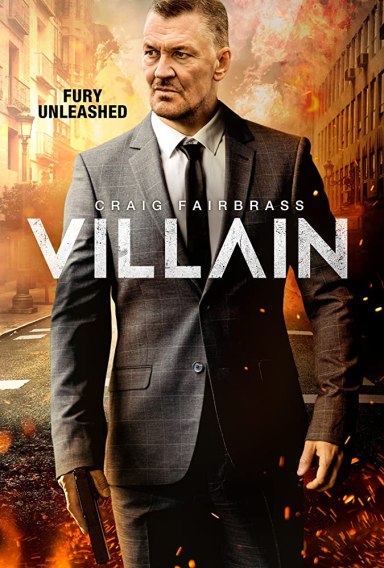 Craig, I am excited to be talking with you. I watched Villain and I loved it! I felt it was the British equivalent of a Scorsese film.
Wow! Those are big words! Big words! (Laughs). I know what you’re getting at because Scorsese, all of his films have a heart to them. There’s something more to them then just the violence. So yeah, I know what you’re saying.

Awesome! Last year, you were excellent as the villain in Avengement and here you are now playing the opposite in someone who wants to go straight. What attracted you to take on the role of Eddie?
I’ll be brutally honest with you. I always get offered roles and do a lot of roles where I play these tough eggs, or guys as you would call them. I’ve done the Rise of the Footsoldier films where my character is both hearty and one-dimensional. When I do get lucky and sometimes, this happens, something will come across my desk where there is a little bit more going on.

I was more interested in the human story. Something that I keep saying, has a heart. Something more interesting about the character. Someone who has that bit of vulnerability. I was lucky to have jumped at the chance to play the role. It was a good script.

The film is more than redemption for Eddie, but it also revolves around his familial relationships in terms of his brother Sean and daughter Chloe. And I have to say you had such natural chemistry with George Russo [who plays Sean] and Izuka Hoyle [who plays Chloe]. What was it like working with these two actors?
That’s very nice of you to say that because that was an important element to the film. I’ve known George for years. We did another film together called London Heist, which I wrote. George is a very astute, very sharp writer. He knows that part of London. He grew up on the streets so he knows it so much because it’s much like himself. I loved his writing because it was very authentic and very real. In all of our scenes together, it was natural because we are both very similarly styled actors. We both like real, small, and natural and not fake it. So that really worked well.

Izuka is someone who is really moving through the ranks. She’s an incredible actress. Beautiful girl. She went through the audition stage and she was one of the last six. She then came in and read with me and we filmed it on camera. She had a naturalness about her. She was very, very real. And my style of acting is very real, so it worked straight away.

And we watched it back and I said, that’s the kid. She’s gotta play Chloe. She’s not only beautiful. She’s a f**king powerful actress! And working with her was just phenomenal. Every take and scene she did, she was on the money. Emotionally, she was there. It made it easier for me because every time the cameras roll, she had that look in her eyes. She got it because when your dad spends ten years in prison, and he comes out and just wants to reconnect with his family and do the right thing, as you said, the chemistry was there and it really worked well.

That’s awesome. So with this being a human story, did director Philip Barantini allow you free reign as to how to bring Eddie to life?
Yeah! We did a lot of prep. We spent about a week chatting things through, just talking. Then we were playing around with the scenes. I like to change things to make it more natural, mainly the vernacular. Philip’s a lovely human being because he’s not cold and like me, he knows it’s a team effort. All we wanted to do was make the best possible film we can. Regardless of who comes up with the idea, it’s about working together.

What would consider the most challenging thing about the film? My guess would be the action because it was minimal, but it was very brutal when it was depicted. I mean there were very disturbing things and I think you may be used to that, but I’m sure it was a bit of a challenge.
Well, I’ll be honest with you. We tried to make the violence, well, less is more. When it came, it was disturbing and very horrible. But it would be something real, not like a fantasy where you are kicking and punching like a lot of the low-budget American action films. We wanted the fights to be real, and the dismembering of bodies and the blood. It was difficult because we had proper exceptions.

But, when we did do the fights and there was grappling, we wanted to make it minimal. But we needed it to underpin the story. When the violence came, it had impact and made you think. It makes you realize that Eddie had crossed the line, reverting back to the man he was before and those 10 years were now a waste of time because he had hoped to be a better man. He was a victim of circumstance.

That’s completely true! So finally, are there any new films in the works that you can talk about?
Yes! I have a film called Muscle that’s coming out in June. Keep an eye out for it. It’s a black and white arthouse film. It’s about toxic masculinity in the gym culture. It has an incredible director, Gerard Johnson, who directed an excellent film called Hyena. It’s a really wild insane film so keep an eye out for it. I also have the new Rise of the Footsoldier movie coming out shortly, number four in the series as well.

That’s great! Villain comes out on May 22 and if you want to see a human story revolved around the world of London gangs, this is a film you need to see, especially because Craig Fairbrass gives an amazing performance. Craig, it’s been a pleasure and I hope you stay safe.
Thank you mate! I hope you stay safe too. Take care!

A Special Thank You goes out to Katrina Wan PR and Craig Fairbrass for making this interview possible.

One thought on “Becoming a “Villain”: An Interview with Craig Fairbrass”