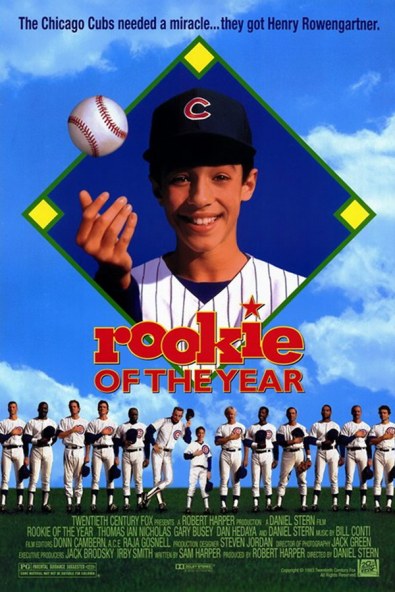 Before he delved into some American Pie, Thomas Ian Nicholas stars in this fun family film directed by and co-starring the great Daniel Stern.

Henry Rowengartner is a 7th grader who dreams to be a pitcher like his father, who left the family years ago. However, he is relegated to the outfield and is not exactly the greatest player in the world. While he has support from his mom Mary, and best friends George and Clark, Henry still is going through some issues. One fateful day, in an attempt to impress his crush Becky, Henry attempts to catch a fly ball after school but he slips and ends up breaking his arm.

Forced in a cast at first, Henry soon discovers that his tendons have healed tightly. When he goes to a Chicago Cubs game with Clark and George, forced to throw a home run from the other team, Henry discovers he has been given the ability to throw a fast ball. The Cubs, who are in serious financial trouble, see Henry as a cash cow. As Henry joins the team, he is mentored under the aging Chet “Rocket” Stedman. However, on his journey as a Cubs pitcher, Henry discovers the trappings of fame can cause some serious trouble. Can he get out of the jam and try to find normalcy again as a middle schooler?

The early 90s was a time where kids playing sports in films became a staple since the days of The Bad News Bears in the 1970s. The national pastime of baseball was perhaps the most iconic of these sports to be seen on the screen during this period. From The Sandlot and Little Big League, we have this film about a young kid who lives a dream in a way he never imagined but learns the price of becoming a major star. And who better to have a double dose of comic relief from both the lead star and the director of this film?

Thomas Ian Nicholas, who would become world famous six years later as Kevin in the American Pie franchise, is great as the titular rookie, Henry. As a normal kid who is going through typical school issues, from being bullied by his little league teammates to having a crush on one of the most popular girls, we soon see Henry go through a crisis when he breaks his arm. There is a funny brief montage of Henry in his cast as he gets some attention from said crush, played by the Mighty Ducks franchise back-up goalie Colombe Jacobsen, to his teammates still in a way tormenting him.

It is once he gets his powerful fast ball that the fun really begins. With the legendary Gary Busey as a nearly down and out pitcher at the end of his rope, who becomes Henry’s mentor and director Daniel Stern as the other comic relief, the bumbling pitching coach who always finds himself in some crazy situations, Henry gets to use some funny tactics against some of the big stars of the diamond. This is a year before Luke Edwards would pull the same routine as owner and manager of the Twins in Little Big League.

The film does get to show the downside of fame too, with people around him who are just too greedy for their own good. This includes Dan Hedaya as the money-grubbing general manager, who is willing to do what it takes for more green and Bruce Altman changing from nerdy boyfriend to Henry’s so-called manager, who not only becomes greedy in his own right, but grows increasingly jealous of Henry’s mother getting close to Busey’s Stedman. Things only get worse when Henry is forced to be alienated from his two best buddies, played by Patrick LaBreque and Robert Gorman. However, as with all of these types of films, one knows what to expect and even offers a sweet little twist in the final moments.

Rookie of the Year is a funny and heartwarming 90s baseball comedy about the ups and downs of fame on the diamond, with Thomas Ian Nicholas and Daniel Stern providing some fun comic relief and Gary Busey in a funny yet at times emotional performance as a mentor turned friend.