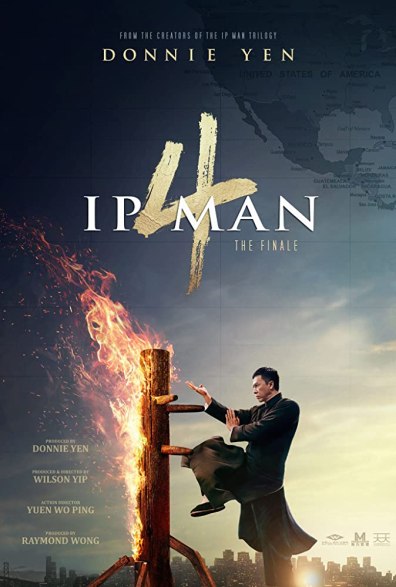 It is the year 1964. Grandmaster Ip Man has learned that he has head and neck cancer and as a result, he is to stop smoking. To make matters worse, his son Ip Ching has been expelled from school due to his erratic behavior and a penchant for fighting. When Ip’s student Bruce Lee invites him to go to California to see him at the Long Beach Invitationals, at first Ip is reluctant to go. Eventually, he decides that perhaps a change of environment could be great for both him and his son.

Upon his arrival in San Francisco, he is met by the Chinese Benevolent Association, who want Ip to convince Bruce not to teach kung fu to non-Chinese. Ip refuses and finds himself at odds with the leader of the CBA, Tai Chi master Wan. However, after rescuing Wan’s daughter from a bullying incident, Ip and Wan have respect for each other. Meanwhile, a student of Bruce’s, Marine Staff Sgt. Hartman, wants to introduce Chinese kung fu in the training regiment of the Marines. However, Gunnery Sgt. Barton Geddes has opposed it, convincing all, even by force that Karate is the best martial art. When Barton sends him teacher to cause trouble at the mid-Autumn festival, Ip Man is able to defeat the teacher, sending Barton into a frenzy and he will take on any kung fu expert to show its inferiority. Will Ip rise to the challenge and show there is not one dominant martial art?

After eleven years, it is the end of an era. It all began with Ip Man¸ the story of the famed Wing Chun grandmaster who would be best known as Bruce Lee’s teacher. With Donnie Yen breaking out in one of his finest performances, the original film would be well known throughout the world and it would make the real-life martial artist an iconic figure as big as his student. Countless films with the character would be released, including an unofficial prequel and a finale of that prequel from Herman Yau and Mainland China offering their takes on the character as well. However, one thing is for sure. Donnie Yen personified the character in his collaborations with Wilson Yip and originally meant to stop at Ip Man 3 in 2015, it was finally time to do one more film as a final chapter to close the book on the legacy of Ip Man.

The one thing to note is that while some of Ip Man’s core plots here are a bit on the fictitious side, it is more about the heart of the martial arts and does shed to light some of Ip Man’s real life. For this film, the setting is 1964 and this is after Ip’s wife passed away in 1960 from cancer. The film does feature a more dominant role for Bruce Lee, reprised by Danny Chan, who played the icon in Ip Man 3 in a brief role. Here, we see Ip go to San Francisco’s Chinatown to see Bruce and finds himself in a situation similar to that of Ip Man 2: the topic of racism and the use of Chinese kung fu being inferior. While it was done in a Western Boxing vs. Kung Fu riff in Ip Man 2, this one delves into familiar territory with the long standing on-screen rivalry between Karate and Kung Fu, a staple for many 1970s era Hong Kong action movies.

Wu Yue plays Tai Chi Master Wan with the belief that Chinese should only teach Chinese and keep traditions, despite her American educated daughter having more of an interest in cheerleading. Played by newcomer Vanda Margraf, Wan’s daughter finds herself mercilessly bullied by some of her classmates out of sheer jealousy. Van Ness Wu brings a pivotal role as a Marine staff sergeant and Bruce Lee student who, with the commanding officer’s blessing, wants to prove that Chinese Kung Fu would be very helpful in the training regiment of the Marine Corps. Of course, you’re going to have some familiar detractors and they come in the forms of Chris Collins and Scott Adkins.

Collins plays karate teacher Colin, who has the notion that karate is the more superior martial art and proves it by force. However, when he is defeated by Ip Man, who despite being sick, still has the ability to defeat him, that’s when the big gun comes in. And we don’t mean a firearm. We mean Scott Adkins, who is mean-spirited and very dangerous as Gunnery Sgt. Barton Geddes. He not only finds himself attempting to avenge his teacher’s defeat by pummeling the bejesus out of any Chinese kung fu master, but does so with the sheer intent that he thinks not only is karate superior, but America as a whole and has no need for any other culture to interfere. And Hartman starts to retaliate with two simple words and it becomes the start of a short and sweet brawl between Adkins and Yen, two powerhouse talents who after this, should hopefully one day, come together again to bring those talents whether as allies or rivals.

Ip Man 4: The Finale is a worthy conclusion to Donnie Yen and Wilson Yip’s film franchise, with Yen having a very worthy adversary in Scott Adkins, a fun-filled Bruce Lee fight, and a story about the tension of race and culture in San Francisco’s Chinatown. If you liked the previous films, you will enjoy this one.