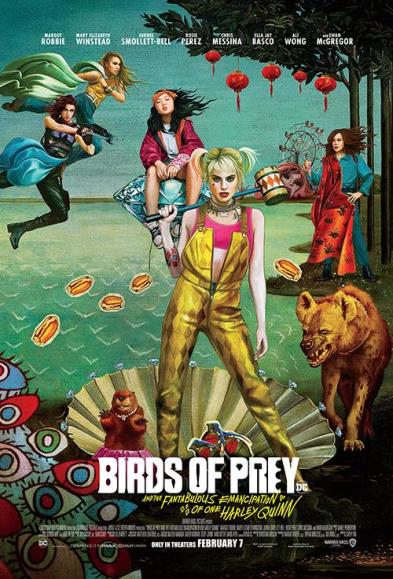 After her adventure with the Suicide Squad, Harley Quinn goes solo and finds herself in a major bind in this exciting and action-packed DC film.

Harley Quinn and the Joker were once crime’s greatest lovers among Gotham City. However, over time, the relationship deteriorated and as a result, the two have broken up. Depressed from the break-up, Harley spends her nights drinking at the local Black Mask Club, run by crime boss Roman Sionis. However, that’s not the biggest issue. After finally letting go of her former Pudding by blowing up the chemical plant where she transformed, she has become the target of almost everyone and their mothers in Gotham.

Deciding to go out on her own, Roman discovers a diamond he had stolen with bank codes embedded in them have been stolen by a teen thief, Cassandra Cain. When Harley offers to help Roman find Cassandra, little does Harley know she’s not the only one after Cassandra. There’s police officer Renee Montoya, who doesn’t get respect from her fellow GCPD officers; Dinah “Black Canary” Lance, a lounge singer with impeccable martial arts skills; and Helena “Huntress” Bertinelli, who is looking for anyone involved in her family’s murders years ago. Harley soon learns the truth about what Roman is up to and as much as no one can stand Harley, one thing’s for sure. She can’t stop him alone and will need the help of Montoya, Black Canary, and Huntress to protect Cassandra.

A spin-off of, if you will of the 2016 film Suicide Squad, this film seems to have only one bit of a gripe that is ultimately forgiven. The film would have been better named Harley Quinn and the Birds of Prey, because this seems to be more of a Harley Quinn movie and not enough focus on the titular team. However, much like Marvel’s Guardians of the Galaxy, there is a foundation in terms of us getting a bit of an origin story meshed with a Harley Quinn story. Nevertheless, this film is a wild, profanity-laden action-packed, fun comic book film that just relishes on the word “fun”.

Margot Robbie originally proved one thing in Suicide Squad and once again proves it here: she IS Harley Quinn. From her cute animated introduction, which serves as her brief origin story done in a matter of minutes, we see her an emotional wreck as she is dealing with her breakup from the Joker. She spends her day crying and nights getting wrecked at the local nightlife of Gotham, notably the Black Mask club. Ewan McGregor chews and hams it up as villain Roman Sionis, who is also known as the villain whose club he names: Black Mask.

As for the eventual team known as the Birds of Prey, Jurnee Smollett-Bell is great as Black Canary, the singer at the Black Mask club who has quite the martial arts skills. Whoever trained Bell for the film, members of the renowned 87Eleven stunt team, get major props for their training Smollett-Bell because she does look pretty good when she fights. Mary Elizabeth Winstead brings a sense of mystery in the role of Huntress and yet, throughout the film, we learn little by little while she is the motorcycle-sporting crossbow-using vigilante. Rosie Perez is tough as Renee Montoya, who deals with gender discrimination at work because she is not only a female but a lesbian, with her ex, an assistant district attorney played by comedienne Ali Wong, making the most of her screen time as the character as she seems to be forced into situations she is uncomfortable with perhaps because of her former relationship with Montoya.

As mentioned, the 87Eleven Stunt Team did the action and they did an excellent job on the film. With slow-motion action shots and getting a chance to see Robbie pull off a few moves a la John Wick along with Smollett-Bell’s martial arts skills, the action is quite fun. One of the big highlights involve Harley breaking into the Gotham City Police Department armed with a gun that shoots bags and confetti with the guards taking falls of unbelievable proportions. The end fight, involving Quinn and the Birds of Prey protecting the teenage Cassandra, hilariously played by Ella Jay Basco, taking on Black Mask’s army with all their skills to the tune of the Heart classic “Barracuda”.

All in all, Birds of Prey (and the Fantabulous Emancipation of One Harley Quinn) is a wild action-ride that just proves that Margot Robbie IS Harley Quinn. A great supporting cast in the titular team and the campy (yet still fun) performance of Ewan McGregor makes this one for the comic book fans to watch!