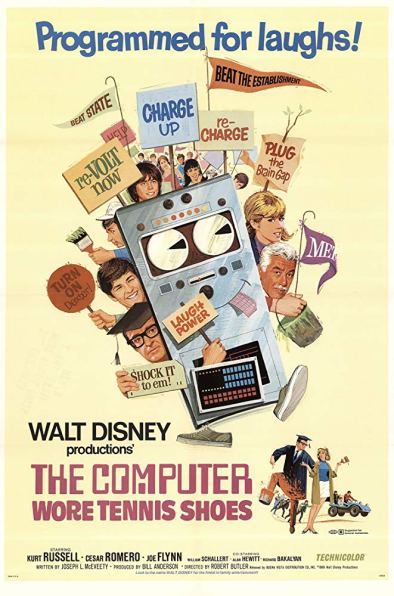 Everyone knows Kurt Russell as a total badass today but remember the days when he was starred as college student Dexter Riley in a trio of films for Disney? This is the first of those films.

Medfield College student Dexter Riley is a smart college student who has been slipping lately and Dean Higgins is unhappy with the progress of certain kids in the science department, run by Professor Quigley. When Quigley suggests the school buys a computer, Higgins is outraged because they can’t afford it. However, Dexter convinces a former boss, investment banker A.J. Arno, to help donate an old computer to the school, which he happily agrees. One night, Dexter is fixing the computer during a thunderstorm and is accidentally struck by lightning.

When he awakens, he discovers on the day of a major test that he has become the world’s smartest man due to having the computer’s knowledge in his brain. Surprisingly, Dean Higgins learns of Dexter’s skills and has him compete against a rival school in a television quiz tournament for a $100,000 prize. However, Dexter also learns that Arno is not just an investment banker but the head of an illegal gambling ring and when Dexter’s brain triggers some details on the crimes, Arno plans to shut Dexter down for good.

When Kurt Russell joined Disney, he would appear in films and specials such as The Horse in the Gray Flannel Suit and Willie and the Yank: The Mosby Raiders. However, in 1969, when he was 18, Russell found his Disney breakout role as Medfield College’s unluckiest student Dexter Riley. For this first film in a trilogy of mishaps for the youngster, he is given a shock from a thunderstorm and becomes the world’s smartest man. There are plenty of comic gags in the film, notably that of Joe Flynn’s constant over the top yelling as Dean Higgins, the reaction to everyone when Dexter passes his first test, not to mention the combination of real stunts and screen effects for the car chases.

Russell would not be the only actor to appear in all three films, which include Now You See Him, Now You Don’t in 1972 and The Strongest Man in the World in 1975. Aside from Flynn’s over the top Higgins, there’s former Joker actor Cesar Romero as antagonist A.J. Arno, and Michael McGreevey as the comic foil to Riley, his bestie Richard Schuyler. Writer Joseph L. McEveety did a great job in the script in terms of making Schuyler a very funny comic foil to Dexter. There’s also the very level-headed Professor Quigley, played by William Schallert, who doesn’t appear in the second film but returns for the third. He is calm and collected when it comes to Higgins’ over the top antics.

The film was given a made-for-TV remake in the 1990s with Kirk Cameron in the Kurt Russell role, but that doesn’t compare to this original. The Computer Wore Tennis Shoes is a fun Disney film that showcases Kurt Russell in perhaps the first of his many iconic roles with a fun sidekick in Michael McGreevey’s Schuyler, Joe Flynn’s OTT Dean Higgins, and Cesar Romero’s most fun villain role since the Joker.