This interview originally was printed in 2012 for Kung Fu Cinema. This is the first of a trio of “flashback interviews”, which were recently unearthed from the Internet Archive.

Hailing from China, former Shaolin monk Zheng Liu recently made his film debut opposite Hong Kong legend Gordon Liu and former American Gladiator Alex Castro in Blood Money. Some are hailing Zheng as the “Next Bruce Lee” due to a bit of a resemblance to the legend. In this interview, we asked Zheng about his martial arts background, making his first film, and how he feels about being called the next Bruce Lee. 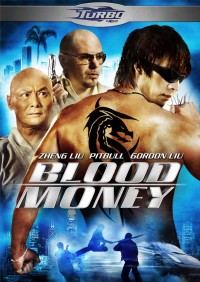 First of all, I would like to thank you for taking the time to do this interview considering your busy schedule.
Thank you for talking with me. I appreciate this very much.

For the fans who are unfamiliar, can you introduce yourself and how you got started in the martial arts.
When I was twelve years old, I left my family and home and went to the Shaolin Temple.
At the Temple, there is two parts. The worship in the Temple and the Shaolin Kung Fu school. As soon as you go there, you start learning martial arts. It is like learning English for a child at another school.

How long did you train at the Shaolin Temple and how rigorous was the training there?
I trained for six years until I was eighteen and then I was good enough to become a Shaolin Master. The training is very very hard. We train every day except Sunday. In one day we would do seven or eight hours of Kung Fu and other training, then after that normal studies like maths and language, eat and then bed. This is what we did for six years.

Did you always have the notion of becoming a martial arts action star?
I never thought of this. I’ve always watched action and kung fu films and believed I could do what they do, but never thought I would go into a film myself. When Greg [McQualter, the writer/director of Blood Money] visited us in China, I did not know what he was here for. He filmed many students but said they were not what he wanted. Then they asked me to show him what I could do. Straight after that, he asked me to star in the film. I was not sure about leaving Shaolin and going to another country away from my family, so I thought hard about it for nearly half a year. I decided to do it and my Master agreed to let me try this which would be a good way to maybe show Shaolin to the world through films.

Who would you consider your influences in terms of martial arts training as well as martial arts films?
Of course Bruce Lee. Everyone respects him so much. I like Jackie Chan because he does his own stunts even if he hurts himself. I like Jet Li also. However, I want to do my own style which I think is different to the others.

How did you get the lead role for Blood Money and what is your opinion on people calling you “The Next Bruce Lee”?
As I said before, really just from Gregory coming to vist us and thinking I could do this. I had not had acting training but he said he wanted me like I really was. Of course, no one can be Bruce Lee, that is crazy. I don’t really like hearing this. It is embarrassing with me. I think what they are saying is that maybe I could be in films that go around the world like what Bruce Lee did. But Jackie Chan and Jet Li do this already. I hope people can see me not like someone else.

Gordon Liu is a legend in martial arts cinema. What was it like working with him and did he offer you advice on breaking into martial arts films?
When Gregory showed me a picture of Gordon Liu and said that he would be the Shaolin Monk in Blood Money, I remember saying to him that he must have the wrong photo. He said why. I said because this man is a very, very big star in China. He would not go in our small film. But he did. I could not believe working with him. He is so nice and knows everything about acting and martial arts. He showed me many things when we were together. I have to thank him a lot.

Was it easy to transfer from real martial arts to martial arts fighting for film? What was it like working with [fight choreographer] Jack Wong Wai-Leung? Did you have any input in the film’s fight scenes, especially in your fight against [former American Gladiator and co-producer] Alex Castro?
The fights are the same as we do for real. Except with Alex, the actors were real fighters so I was really kicking them and punching them. Maybe not 100% full force but still very hard. They got hurt. Me also a bit. We did not do a shot many times, usually just once and the camera would keep rolling. Jack was great and had done many fight scenes before. But we worked out the scenes as a team. Jack, myself, Greg, James [McQualter] and even Mario [Vega, who plays enforcer Alvaro] who is a great Muay Thai fighter. When I did the big fight with Alex at the end, this was very hard on him. We would work out the moves, but I was hitting him very hard. You can see this in the film. One time, I hit him maybe fifteen times and he was hurt. Everybody was happy, but there was a problem with the camera and we had to do it again. I don’t know how Alex could do this again.

There are people who are skeptical in terms of showing certain tricks on camera. One impressive move you perform in the film is the breaking the steel bar over your head. Was that part of your training at Shaolin?
Yes, a very big part. Sometimes, I still cannot believe that I can do this. But it is not about breaking of the steel. It is about one thing. Learning to bring all of the power in your body to one place. So if I bring it to the top of my finger, I could break a dinner plate with just the top of the finger. If I bring it to my arm, then I have the speed to throw the pin through the glass. People say they can maybe understand this but how come when you break the steel on your skin, it is not cut or bruised. I don’t know the answer 100% of this also. It seems like some spiritual thing with our mind and body which we don’t know. I think there are many things we can learn through Shaolin.

Do you have any plans in the future to star in any more martial arts films? Blood Money was definitely a decent debut for you and I personally would love to see you really strut your stuff in a film.
Yes! It was our first film and I know we will do much better and bigger things next time. I did not know English really well when we were filming and this was the hardest thing. I was worried about my talking and it affected other things. We were all learning on this film. We did not have much money but did the best we could. I think in the next film we will now have experience and really show what we can do.

Gregory has many films coming up and our next film is probably going to shoot in New York, around Winter time he says. He has told me about the story and it sounds very strong. Not just action, but when Chinese culture meets America culture in real life. We have many big stunts and fighting and action planned for this. It will look very real with real street gangs. But interesting story. I hope you will be able to see this next year.

Thank you so much Zheng. I wish you success with Blood Money and your upcoming projects.
Thank you again very much for talking with me and maybe can see you in person one day.

A special Thank You goes to Katrina Wan PR and Zheng Liu for making this interview possible in 2012.