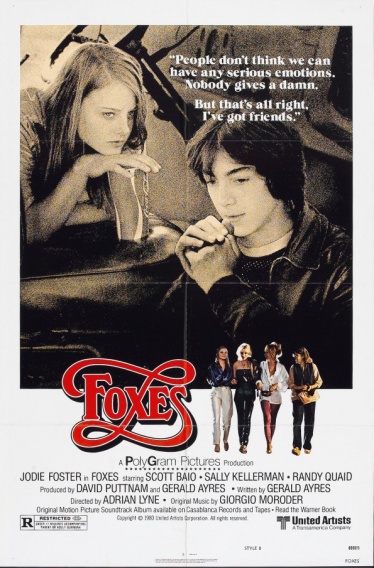 The lives of four teenage friends in Los Angeles begin to unravel in this really good film that features a star-making performance for Jodie Foster and former Runaways singer Cherie Currie in her film debut.

Jeanie, Annie, Madge, and Deidre are four best friends in the San Fernando Valley. They spend their days trying to ditch school and their nights out on the town. Each of them have a different personality. Jeanie is the leader who tries to keep the group afloat. Annie is the most troublesome of the group, going down a slow spiral of addictions. Madge is the nerdy one with a bit of a secret involving a relationship with an older man. Deidre is the promiscuous one, jumping from boyfriend to boyfriend.

Things slowly begin to look bad for the group when Annie finds herself in constant risk of getting into trouble due to her addictions. The group can’t even rely on their own parents to help them deal with their problems, especially Annie’s overreactive police officer father. Things go from bad to worse when a house dinner at Madge’s boyfriend’s house turns into an all-out party that leads into a very dangerous brawl. Nevertheless, the group decides they must do what it takes to stick together before things take a turn for the worse.

This coming-of-age drama, directed by future Fatal Attraction helmer Adrian Lyne (making his feature film directorial debut), takes a look at teenage life in Los Angeles’ San Fernando Valley and brings a sense of reality thanks in part to the performances of the four leads. After her breakout performances in films like Taxi Driver and Bugsy Malone, this is perhaps one of Jodie Foster’s best performances in the role of Jeanie, the “leader” who may come from divorced parents, but is the glue that brings the group together. While Scott Baio’s Brad gets second billing, his character comes off more as a confidant and reliable ally when needed.

Playing Jeanie’s friends Annie, Madge, and Deidre are all newcomers to film. While Marilyn Kagan (as Madge) and Kandice Stroh (as Deidre) are mostly brand new, the most famous of the group of newcomers comes in the form of Cherie Currie, who got her start in 1975 as the lead singer for all-female rock band The Runaways, which featured music icons Joan Jett and Lita Ford. Currie’s Annie is the most troubled of the bunch with most of the film’s incidents revolve around her due to the character going on a very slow downward spiral thanks to drug addiction and attracting the wrong kind of people. What makes the film interesting is that the group has this natural chemistry that doesn’t have any kind of forced performances. It makes the viewer feel for the group as they attempt to overcome the trials and tribulations of being a teenager.

Foxes is a really good coming-of-age film that brings a sense of reality rather than a happy-go-lucky style film. The chemistry between the four leads has this natural chemistry that makes the film as good today as it was in its initial release.