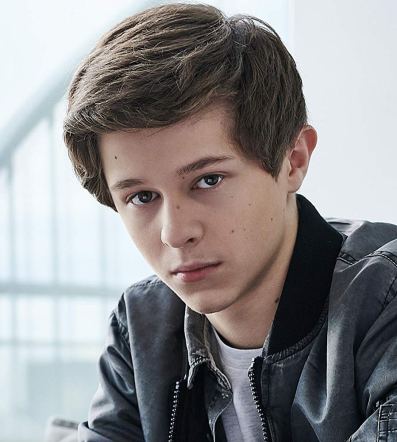 Sixteen-year old Graham Verchere is one of Hollywood’s new budding talents. Starting his career in television, the last year has become his breakout year. From appearing on the TV series version of Fargo to a big role in the live action adaptation of Woody Woodpecker, Verchere is ready for his major breakout role, that of teen sleuth Davey Armstrong in the mystery thriller Summer of 84, coming to theaters, VOD, and Digital HD on August 10 from Gunpowder and Sky.

World Film Geek had the chance to talk to Verchere about the film.

Thank you Graham for talking about Summer of 84. This was a great film that has melds the coming of age film with an intense mystery.
Awesome! Thank you so much. I’m glad to hear that!

For those who haven’t seen the film, how would you describe Davey?
Davey, to me, seems like a pretty normal kid. Except for this little quark of being skeptical and suspicious of every little thing he sees. So when he sees in the news about the serial killer, he naturally decides to go out there and try to solve the case himself.

There was some great and at times, very intense chemistry with Rich Sommer, who plays Officer Mackey. What was it like working with him?
He was a lot nicer than in the movie (laughs). Actually, the entire cast and crew, everyone on that movie was so much fun to be around. I couldn’t remember one day where I didn’t have fun.

Davey and his buddies reminded me of myself with my childhood buddies, minus the obvious serial killer angle. Was that chemistry also brought off-set as well?
I think so. For the first two days on set, we filmed the treehouse scenes because it was in a studio. We met only one before that. We did an escape room, so it wouldn’t be unnatural when we began shooting. We lost the escape room unfortunately (laughs). But, we were in this tiny room on the set for two whole days. To be there for hours at a time and with it getting hot, we had to get to know each other really quickly. I think it shows on the camera that we really liked each other.

The trio of François Simard, Anouk Whissell, and Yoann-Karl Whissell, known as RKSS, did a great job at executing the film. What were they like to work with on the set?
I was really impressed by how well they worked together. They all agree on everything but if they didn’t, they figured out a way for it to work together. For me and the other actors, we interacted mainly with Yoann. The other two mostly did other stuff, but they split it up perfectly and did a great job. You can see in the movie how well it works.

What would you say is the toughest part about shooting the film?
Hmmmm. I don’t know. It was a lot of work, because I was in most of the film. So, I was there for most of the 22 days during shooting. For me, the hard scenes came when things would become intense and emotional. The more scary scenes would be my last day of shooting so that was the most difficult thing for me.

Davey is somewhat of a detective. Had you not been an actor, would that be something you would pursue down the road?
Me personally, I don’t know about that (laughs). I like doing puzzles and looking up mysteries online. But, I don’t think that’s something Davey and I have in common. I wouldn’t be able to do that in real life (laughs).

Finally, are there any new projects on the horizons that you can talk about?
I have some that I can’t talk about quite yet, but there is a lot of exciting stuff on the way.

Great! Well, Summer of 84 is coming to theaters, VOD, and Digital HD on August 10. If you like coming of age films and you like intense mysteries, then you will like this film. Thank you again Graham for talking about the film.
Thanks for having me!

A Special Thank You goes to Katrina Wan PR and Graham Verchere for making this interview possible. For more on Graham, you can follow his Twitter page.