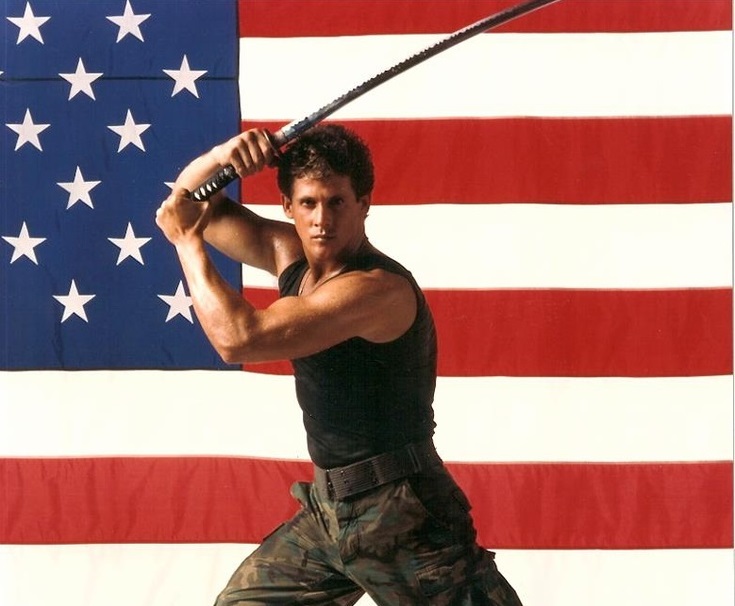 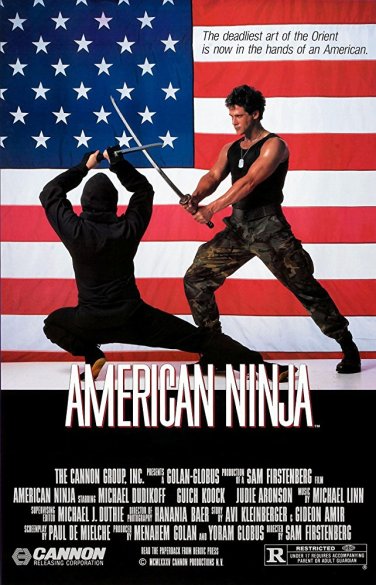 In the wake of the 1980’s Ninja movie craze, Menahem Golan’s Cannon Films would unleashed one of the most well-known Ninja films of the 1980’s. After the successful Sho Kosugi trilogy (Enter the Ninja, Revenge of the Ninja, Ninja III: The Domination), the idea was pitched and thus, the American Ninja was born.

Originally titled American Warrior, the film revolves around a young Army private, Joe Armstrong. Joe is seen by his peers as someone who doesn’t really fit the mold of the Army. In other words, he is basically an outcast but only because if he didn’t enlist, he would go to prison. When he is sent to drive a convoy full of weapons, he finds himself hijacked with his peers by a band of terrorists. When he takes the lead in fighting against the terrorists, he ends up rescuing Patricia, the daughter of commanding officer Hickock. While Patricia appreciates his efforts, he is targeted by his fellow soldiers after the terrorists are revealed to be in cahoots with a band of ninjas.

The ninjas, led by the Black Star Ninja, work for international crime lord Victor Ortega. Ortega plans to use the weapons and sell them to a Colombian crime boss. Meanwhile, Joe is confronted by another senior officer, Curtis Jackson. After a fight ensues, Jackson has come to respect Joe and his skills. Soon, Joe’s true story is revealed. He is an amnesiac who only remembers his skills throughout a series of dreams. When Joe becomes the scapegoat after it is revealed that there are moles within the Army working for Ortega, he meets Ortega’s gardener Shinyuki. Shinyuki reveals that he had raised Joe after finding him as a baby. Shinyuki trained Joe in the art of ninjitsu before an explosion separated the two, resulting in Joe’s amnesia. When Patricia is kidnapped by Ortega after Hickock refuses to give him the weapons, Joe must use his knowledge of ninjitsu to begin a war against Ortega and the Black Star Ninja.

One of the top Ninja films of the 1980’s, the film combines some well-done action sequences with a nicely filled out story revolving around the titular character. Originally, the film was to have starred Chuck Norris, but eventually, the film would shoot Michael Dudikoff, who previously appeared in the horror film Bloody Birthday and the Tom Hanks comedy Bachelor Party, to action star status. Dudikoff gives out a great performance as Joe, the American Ninja. At first, not much is known about him. However, as the film progresses, we learn little tidbits about Joe until the third act, where his story is finally revealed.

With heroes of this caliber could come a sidekick and no one makes the sidekick here better than the late Steve James as Curtis Jackson. At first, he is at odds with Joe because of the incidents in the opening of the film. However, as a martial artist himself, Jackson ends up respecting Joe. He goes as far as becoming pretty much his best friend in terms of the mission at hand. By the climatic finale, Jackson ends up looking like an African-American version of Rambo. It is unclear if the producers or writers came up with the gimmick as a means to combine Blaxploitation with the Ninja genre. For some strange reason, it works well here.

Michael Dudikoff had no martial arts background prior to making the film. However, he proves himself well in the fight sequences. His trainer is the film’s action choreographer, Mike Stone. Stone had previously worked as action director and stunt double for Franco Nero in Enter the Ninja. Here, he does the double duty again of working as both action director and Dudikoff’s Ninja double. Playing the lethal Black Star Ninja is veteran martial artist Tadashi Yamashita, who pulls off the role very well. It is a refreshing change from Sho Kosugi, who by this time, signed with Trans World Entertainment and starred in more Ninja fare such as 9 Deaths of the Ninja, Pray for Death, and Rage of Honor to name a few. One person to have auditioned for the role of Joe was Kurt McKinney, who was deemed too young. However, he gained fame in the martial arts film genre shortly after with No Retreat, No Surrender opposite Jean-Claude Van Damme.