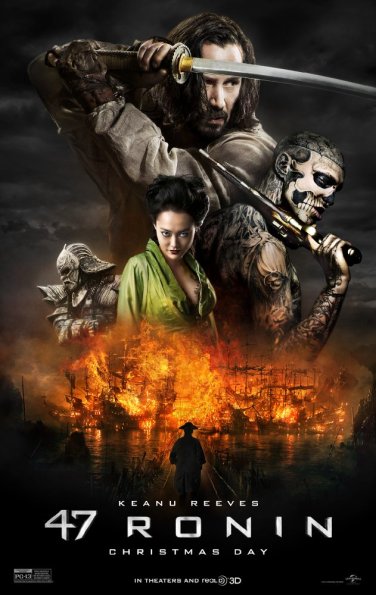 The famous Japanese legend is given a supernatural twist in Carl Rinsch’s story. Despite the film being one of the biggest flops of 2013, the film is actually worth seeing.

In the times of feudal Japan, a young teen is found in the forests of Ako. Thought to be a demon, he is revealed to be half-Japanese, half-Caucasian. Lord Asano, the ruler of Ako, offers the boy shelter and takes him in. As the boy, to be known as Kai, grows, he begins to fall for Mika, the daughter of Lord Asano. However, the romance is verboten due to their differences in both class and race.

Years later, Kai assists Asano’s loyal samurai Oishi in a forest where he believes there is trouble awaiting. Lo and behold, a demon arrives and while many of Asano’s men are hurt in the battle, Kai is able to defeat the demon. Kai has pledged his loyalty to both Lord Asano and Oishi yet still has love for Mika. Meanwhile, Lord Asano is given a visit by a rival, Lord Kira and the Shogun. When a competition is to be held by Asano samurai Yasuno and a behemoth member of Kira’s samurai, Yasuno is out of commission. Kai takes Yasuno’s place and brings disgrace to the house of Asano when his cover is blown. Instead of death, he is beaten mercilessly and even more shocking, Asano learns of the love his daughter has for Kai and shuns her as a result.

Lord Kira, hellbent on taking over Japan, relies on a witch to set up Asano for a trap. Using her powers, the witch puts Asano under a spell to think Kira is raping Mika. However, when Asano attacks Kira, Kira is revealed to be alone and as a result, the Shogun decides that instead of execution, he offers Asano to regain honor by seppuku, a ritualistic art of suicide. The Shogun declares Oishi and the rest of the men ronin (masterless samurai). Kai is also banished. However, Oishi is forced into a pit in an attempt to have his will broken. While Kira wants Mika to marry him, the Shogun gives Mika a one-year grievance period before the wedding. The ronin are also forbidden from seeking revenge for their lord.

A year has passed and Oishi is free from the pit Lord Kira had imprisoned him in. However, instead of having his will broken, Oishi has had only one thing in mind: revenge. With help from his son Chikara, Oishi is set to bring the ronin back together and because of his honor, he decides to get Kai, who has been sold to slavery and forced to fight in the pits of a pirate-like area. What Oishi soon learns is that Kai is no ordinary faithful halfbreed.  He has a dark secret, one that could help the ronin get their revenge on Lord Kira and bring honor back to the fallen House of Asano.

The story of the 47 Ronin is one of the most legendary stories to come out of Japan.  The story is that Lord Asano’s house was fallen to the evil Lord Kira. The loyal samurai of Asano were banished and became ronin. Oishi led the ronin to attack Lord Kira in order to regain honor to the house of Asano. Starting out as a kabuki play, it became one of the first jidai-geki (period films) in the 1910’s and 1920’s. There have been many variations of the story brought to films but none like this. Chris Morgan, writer of the last four installments of the Fast and Furious installments (including next year’s number seven), and Hossein Amini wrote the screenplay based on an idea by Morgan and Walter Hamada. The idea was to take the legendary story and add a twist involving the supernatural. Interestingly enough, the main legend is still there and the supernatural elements involving witchcraft and demons add a nice touch to the story.

Many are wondering what Keanu Reeves is doing in the film. Well, his central protagonist of Kai was created for this version of the film and he proves to be vital to the overall story. However, it is clear that while he is given top billing, this is definitely Reeves and Hiroyuki Sanada’s movie. The veteran Sanada gives out a wonderful performance as the ronin leader Oishi, who overcomes a year of imprisonment with one goal in mind. It is clearly Oishi who is the real leader and star of the film, with Kai as his most trusted ally.

While there are those who will complain that the virtually all Japanese cast speak English, one can only guess is to bring a style similar to those of graphic novels and to attract an international audience, the Japanese cast speak English. However, the ensemble Japanese cast is top-notch in their roles. Tadanobu Asano plays it very sly as the evil Lord Kira while Battle Royale and One Missed Call actress Ko Shibasaki does quite well as Mika, the lovelorn daughter of Asano who is in love with Reeves’ Kai. One can’t help but love Rinko Kikuchi. She is definitely a great talent who gives out one of her best performances here as the evil witch who uses her powers to help Lord Kira achieve his power. She even has a lustful inclination towards Kira, forcing her Mika into some sort of submission with dangerous threats. In his limited screen time, legendary Cary Tagawa makes an impact as the Shogun while one has to give kudos to debut actor Takato Yonemoto in his role of the likable Basho. The former hospital worker and film buff plays one of those characters one would just like to pal around with.

The action scenes are nicely done as well. Where to begin in terms of the hard work the cast pulls off in the frenetic action? Tsuyoshi Abe, a veteran martial artist and stuntman, served as sword master while the collaborating team of Nikki Berwick, Stephen Oyoung, and Zhang Peng served as the film’s fight choreographers. These three are definitely veterans in the stunt field and their hard work pays off here. One can’t help but praise Reeves into the hard work he tends to bring when it comes to action scenes. As if he does well performing unarmed combat in films, he pulls off some handy swordwork with his fellow cast members and the battle sequences get better as the film progresses, leading into a nicely shot final battle sequence.

So the question is if the film is decent, why did it flop? Perhaps bad timing a lack of decent promotion?  Whatever the case is, this reviewer recommends a rental and possible buy for Carl Rinsch’s 47 Ronin. It is not that bad at all with the supernatural elements adding a nice touch to a legendary story with a stellar ensemble cast. Even more, one cannot underestimate the hard work of Keanu Reeves in terms of performing action. Maybe after all these years, has he finally found his calling? Only time will tell. Nevertheless, definitely rent this film.