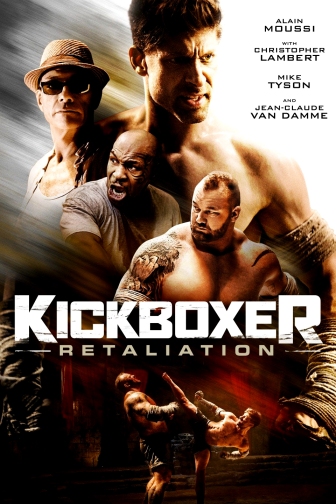 Kurt Sloane returns as he finds himself facing his most dangerous challenge yet in this long-awaited sequel to the 2016 reboot Kickboxer: Vengeance.

It has been eighteen months since Kurt Sloane avenged his brother Eric’s death when he killed Tong Po in an underground fight. Having left his past behind him, Kurt is now a professional mixed martial artist gearing up for a title shot. However, after his latest match, he finds himself accosted by two U.S. Marshals, who tell Kurt they plan to implicate him in the murder of Tong Po. Soon enough, Kurt finds himself back in a world he never expected to return to.

Waking up in a Thai prison, Kurt learns that the one responsible for his return is Thomas Tang Moore, the man behind the underground fights. He informs Kurt that he was set to become his new champion until he left Thailand. Thomas decides that Kurt will stay and face off against the new underground champion, Mongkut. Mongkut is 6’10” and 400 pounds. When Kurt refuses to fight, he finds himself against other prisoners. However, as he learns that his wife Liu has been kidnapped, Kurt accepts the challenge and finds himself not only reunited with Master Durand, but some other prisoners decide to help Kurt as he prepares for the fight of his life.

Kickboxer: Vengeance, the reboot of the hit 1989 martial arts film Kickboxer, definitely helped Jean-Claude Van Damme come full circle as the mentor with stuntman Alain Moussi showcasing his acting chops as the new Kurt Sloane. Announced even before the film was released, this sequel definitely lives up to its promise when the filmmakers promised more action and more champions. The film lives up to its subtitle as it is now the other side who seek retaliation with Kurt himself looking to seek retaliation for both his and his wife’s kidnappings.

Alain Moussi is back as Kurt and once again, he wows the audience with his martial arts skills. However, the project once again gives him the chance to showcase his acting chops as someone determined to go against the authority. In this case, it is the organizers of the very underground fight ring both he and his brother were involved in. Moussi’s Kurt finds himself in a rut and seeks the mean to find any available resource to help him in his quest for redemption and as the title indicates, retaliation. And that includes the return of Master Durand, once again played by the original Kickboxer himself, Jean-Claude Van Damme. Durand himself is given quite a twist to the plot that allows him to bring both a bit of comic relief and emotional drama while training Kurt.

In addition to Van Damme’s Durand, Kurt finds himself some more mentors within the prison walls. As a matter of fact, he has a team of trainers that include boxing legend Mike Tyson, UFC fighters Fabricio Werdum and Roy “Big Country” Nelson, soccer star Ronaldinho, strongman Brian Shaw and even some monks to help him with his speed. Christopher Lambert really hams up the screens as the mastermind behind the operation, Thomas Moore. The former Highlander himself even gets in on a sparring scene involving swords against Van Damme while Sam Medina’s return as Crawford is quite bigger than in the first film. Medina still hams it up at times and does all he can to help break Kurt.

As for Sara Malakul Lane, she is given less screen time as Liu but she truly makes the most of it and even finds herself in a pivotal situation that leads to the ultimate showdown. Jessica Jann, replacing UFC fighter Paige VanZant, is not bad as Gamon, Liu’s friend who becomes another ally to Kurt, who looks to be close to another new character, Travis, played by Nicholas Van Varenberg, who is the youngest son of Jean-Claude Van Damme himself. Travis is also revealed to be Durand’s son in the film.

However, the one to look out for in the film is the new big bad fighter and that is another strongman in HafÞór Júlíus Björnsson as Mongkut. Standing 6’8” and 400 pounds, the athlete turned actor, best known as “The Mountain” Gregor Clegane on Game of Thrones adapts himself quite well when he is set to perform action scenes and when a secret about Mongkut is revealed, it calls for the strongman to unleash his fury against two ill-fated opponents during training. Björnsson is a man of few words and lets his action do all the talking for him. There are cameos from two more fighters, MMA legend Wanderlei Silva, who has a short fight against Kurt in the film’s opening sequence as Glory Kickboxing champion Rico Verhoeven, who plays the new fighter of backyard fight promoter Joseph King, reprised by a swooning Steven Swadling.

The action in this film is much more exciting. From the opening fight set on a moving train to the showdown between Kurt and Mongkut, the moments of action are great to watch. Two highlight fight scenes are actually long take fights. The first, set to blues music, shows Kurt having to fight various local prisoners when he refuses Moore’s offer at first. The second is set to the surf classic “Wipeout” when Kurt trails a member of Moore’s organization responsible for Liu’s kidnapping. The final fight pitting Kurt and Mongkut lasts a total of about fifteen minutes with a very pivotal twist midway that is shocking at first but then lives up to the name “retaliation”. The fight choreography by Jean François LaChapelle and co-star Moussi makes the most of the fighters involved in the film. The promise was to deliver more action packed excitement and this sequel truly lives up to its promise. Despite a little bit of overload with slow-motion shots, the film ranks better than its predecessor in terms of action.

Kickboxer: Retaliation truly lives up to its promise of more exciting action and is a step above Vengeance. Alain Moussi continues to make himself known as one of the next generation of action heroes with his ability to do all of the action himself and bring some emotional drama in his role of Kurt Sloane. The supporting cast of fighters along with legends and the hulking HafÞór Júlíus Björnsson adapting well to the action makes this a sequel truly worth watching.

Here’s hoping they can somehow top this with Kickboxer: Armageddon or make it on the same level.