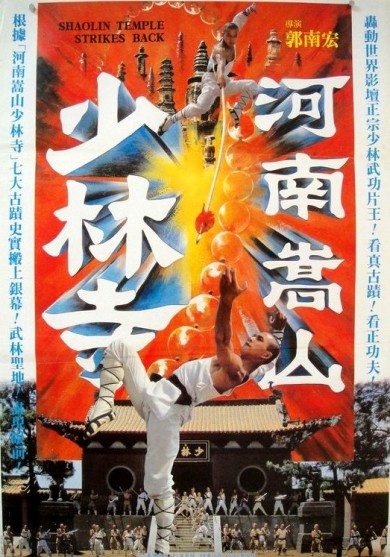 When the Manchus plot to take over China, a princess is en route to safety with entrusted military officer General Kong and young officer Lin Tsai-Shin. However, they are ambushed by Manchu general Long Yi, who proceeds to nearly wipe out the entire envoy. The only ones who manage to escape are the Princess and Tsai-Shin. The Princess decides that the only safe place to go at this point is the Shaolin Temple.

At the Shaolin Temple, Abbot Pure Heart welcomes the duo after hearing of their situation. The Princess makes a fateful decision. While hiding out, Tsai-Shin should become a student and train in Shaolin kung fu. At first hesitant, he eventually agrees and becomes Sze-Lin. Sze-Lin soon learns that the training at Shaolin is very different from that of his former martial arts training.

Meanwhile, Long-Yi is setting up to find a way to kidnap the Princess. In a shocking twist, one of the monks at Shaolin actually belonged to Long-Yi’s gang. When he learns that Long-Yi now wants the Princess dead after kidnapping her, he has a change of heart and decides to join the monks in what will culminate into a showdown between the Shaolin Temple and the Manchu Army.

There have been loads of films that involve the Shaolin Temple and their adversaries. Some of the more famous films include Men from the Monastery, Shaolin Temple, and most recently, Shaolin. However, one can’t help but respect filmmaker Joseph Kuo. He has had the knack for showcasing some amazing talent in his films, from Carter Wong to Hwang Jung-Lee.

Here, Kuo once again tackles the Shaolin Temple as the basis for his film. This time, it is a young Ming imperial guard who becomes a new monk and uses his newfound skills to take on the Manchu army, led by the very talented Chen Shan. Chen is truly one of the most underrated kickers in martial arts cinema. Sporting a shaved head with ponytail and fake moustache, Chen pulls off a great performance as the lead villain while Kuo favorite Mark Long takes the reign as part of the heroes as a drunken monk who is revealed to be an old ally of Chen’s, but retaliates for the heroes when he learns that Chen wants the princess dead, giving Long a conscience.

While Chen and Long are given the top billing, it is Lung Siu-Fei, as imperial guard turned monk Sze-Lin who is actually the central character. While from the beginning, the future Sze-Lin does have some martial arts skills, perhaps the princess felt it will not be enough and thus, have him train at the Temple as a new monk to master more to take on the Army. Siu-Fei’s first scenes with Long provide comic relief but then things get serious when Long takes Sze-Lin as a student.

Max Lee, a.k.a. See Fu Chai, takes the reigns as action choreographer. Lee and his stunt team collaborated well, showcasing some amazing Shaolin skills with a nice training scene involving monks using various weapons. In Shaolin Temple fashion, the film ends with a huge battle between the Shaolin monks and the Manchu army. Long, Chen, and Lung truly stand out in this elaborate sequence as there are bound to be many casualties. However, the only disappointment comes towards the tail end of the final battle sequence. As one can only hope one thing is about to happen, it throws a curveball and not exactly a good one at that.

Despite this minimal flaw, Shaolin Temple Strikes Back is actually a pretty good Joseph Kuo film. Kuo knows his talented cast and utilizes their skills in some elaborate battles, led by a great stunt team.