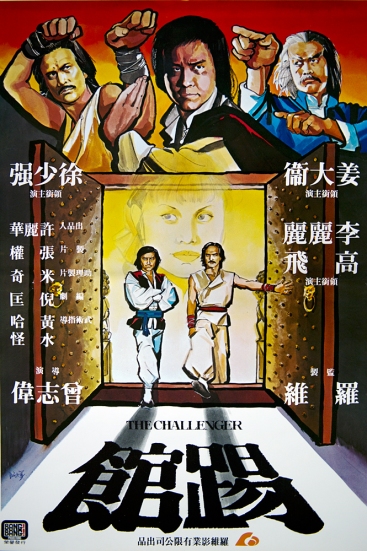 One of Hong Kong’s most prolific actors, Eric Tsang, made his directorial debut with this very good classic kung fu film that has some great performances from its cast of characters.

Chin Chan-Hung is a kung fu expert who has come to town to challenge various kung fu schools. However, his intentions are not nefarious as many might think. He doesn’t intend to close the schools down, but rather find the master who years ago raped his wife. Yu Kit is a kung fu expert who is only after one thing: money. When he is accused of cheating at a casino, he takes care of the casino crew singlehandedly.

When Chin and Yu meet, they become rivals who become impressed with each other’s martial arts skills. Having an amount of respect for each other, they soon find themselves involved in a plot. Yu finds himself hired by Madam Wei to find Chin and kill him. Wei is the concubine of Pai Shi-Chang, a notorious kung fu expert who may or may not be the one responsible for the rape of Chin’s wife all those years ago.

One may not realize that Eric Tsang, who today is one of Hong Kong’s most beloved actors, got his start as a stuntman in classic martial arts films. For his directorial debut, Tsang collaborated with celebrated scripter I Kuang and delved into making an underrated kung fu film that is reminiscent of a Shaw Brothers classic and why not? I Kuang has written some of Shaw Brothers’ most beloved martial arts classics.

David Chiang, who had worked in the early 1970’s as one of Shaw Brothers’ most dynamic action stars, showcases some of his best work here and even provides some comic relief as the money-hungry Yu KIt. Norman Tsui handles himself quite well in the titular role of The Challenger, Chin Chan-Hung, who may seem like a villain at first, but his intentions are clear and thus, ultimately makes him one of the good guys. Philip Ko does quite well as the villain while LIly Li doesn’t get to do much but serve as a catalyst for some of the major events of the film as Madam Wei.

The team of Chik Ngai-Hung and Huang Ha worked on the exciting fight sequences that are nice to watch. The fights are reminiscent of watching some of Lau Kar-Leung’s exhilarating action scenes that earned him the title of legend. Lots of shapes, especially from Ko, are nicely used. Ko uses a combination of forms, including Eagle Fist while Chiang attempts to bring a style similar to Jackie Chan, notably in his casino fight scene with the likes of Mars and Tai Bo (who would join Jackie Chan’s stunt team in its inception). Look out for director Eric Tsang in Tsui’s first fight scene of the film.

The Challenger is a pretty good kung fu film that attempts to combine Shaw Brothers and Jackie Chan-style action. While the film may not be on par with its counterparts, it is still worth seeing thanks to the performances of David Chiang, Norman Tsui, and Philip Ko. Eric Tsang made a worthy directorial debut. Worth a rental.