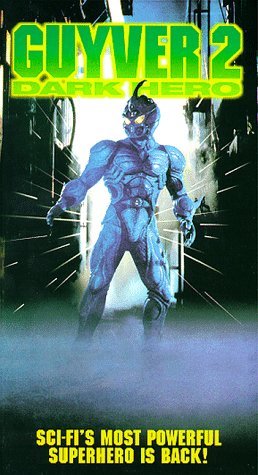 The Japanese-born superhero is back in this far more superior sequel in which its host attempts to find where the units come from.

It has been a year since Sean Barker became the host of an alien-armored unit known as The Guyver. He has been using his powers to dispense vigilante justice incognito. However, he has been having nightmares that he cannot understand. When he learns of bear attacks at an archaeological dig, he is convinced that perhaps some of the attacks are coming from perhaps Zoanoids who escaped from Chronos, the company he has destroyed.

Upon seeing the dig site, he meets Cori Edwards, the daughter of the archaeologist in charge of the dig. Sean’s premonitions soon prove correct when he finds himself facing a Zoanoid as the Guyver. Atkins, an undercover agent, learns Sean’s secret and reveals to him that he had only destroyed the Los Angeles branch of Chronos, who are a worldwide business. Meanwhile, Crane, who works for Chronos, has learned about Sean’s secret as the Guyver. While Sean searches for answers once a spaceship has been unearthed, some major revelations are imminent and Sean will face his greatest challenge yet.

When American audiences were introduced to Yoshiki Takaya’s The Guyver in 1991 via a film starring Mark Hamill and Jack Armstrong, it was met with mostly mixed to negative reviews. While the film’s effects were a highlight, it was the action that proved to be a low point in the film. Three years later, Steve Wang, who co-directed the original film, goes solo for this sequel but this time around, he brings in a cast of mainly newcomers but knowing the first film’s big mistake, amps it up with the action.

David Hayter replaces Jack Armstrong as Sean Barker, the host of the Guyver. For a film debut, Hayter is not exactly a bad actor and brings a sense of emotion when he tries to discover the origins of the very unit he has merged with. This is just in addition of doing what the Guyver does best. Hayter would go on to become a well-known voice actor and screenwriter whose credits include X-Men, The Scorpion King, and even directed the underrated werewolf film Wolves.

Kathy Christopherson’s Cori is somewhat of a meshing of damsel-in-distress and a strong woman. While the character of Mizky Segawa appears in the film, it is relegated to more of a cameo and played by a different actress who thinks Sean is becoming delusional. The interaction between Sean and Mizky in this flashback becomes the catalyst for Sean’s quest. Bruno Giannotta plays the character of Crane as a very dangerous person whose look here and mannerisms has a reminiscence of veteran villain actor Michael Ironside. Christopher Michael proves himself to be a worthy ally as Atkins, an undercover agent who not only learns Sean’s secret identity but is willing to help him upon learning said secret as he has “tracked” the Guyver’s activity.

While the cast is mostly made up of newcomers so the acting isn’t exactly on an Oscar-type level, the real star of the film is the action. Knowing that the lackluster action helped make the original 1991 film somewhat of a mixed bag, Wang employed the services of the Alpha Stunts team to handle this film’s action scenes. The costumes in the film look lighter than its predecessor, this allowing more flexibility when it comes to executing martial arts action. Koichi Sakamoto truly adds a sci-fi element with the use of wirework, but the fight scenes here are simply stunning. Kudos goes to Stone Age Warriors actor Anthony Houk and Sakamoto themselves as they play the Guyver suit actors and perform some fantastic stunts with Sakamoto and fellow Alpha Stunts team founder Tatsuro Koike in the suit of Zoanoid Crane, who does the unthinkable, all leading to a fantastic fight-filled climax.

Guyver 2: Dark Hero is one of those sequel that truly outdoes the original film. The SFX are still great and even amps up some gore-like effects but the martial arts action is breathtaking. If you had reservations about the original film, then you will want to see this sequel for a heck of a ride.