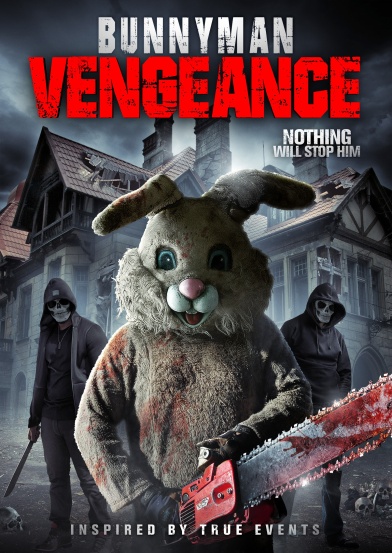 The deadly Bunnyman is about to go on his final hunt and this time…he’s coming close to home!

After unleashing havoc in Bunnyman and The Bunnyman Massacre, the chainsaw-wielding psychoman in the bunny costume is unleashing one more round of terror in Bunnyman Vengeance.

In this final film, Bunnyman returns home to find his family running a haunted house attraction. The family welcomes him home, but soon realizes you cannot domesticate a wild animal. Death and mayhem ensue as the family turn on one another to fulfill their bloodlust. Bunnyman also must contend with the return of Sheriff Clint Baxter, who has been chasing the bunny since the events of the previous installment.

Marshal Hilton, Diana Prince, Boriana Williams, Debby Gerber, Omari Washington, and Michael Shaun Sandy star in the film, written and directed by Carl Lindbergh, the creator of the franchise who also plays the iconic Bunnyman along with Joshua Lang.

Uncork’d Entertainment unleashes Bunnyman Vengeance on Digital HD on October 20, followed by a DVD and Blu-Ray release on November 21.

Check out the trailers for the Bunnyman franchse below: