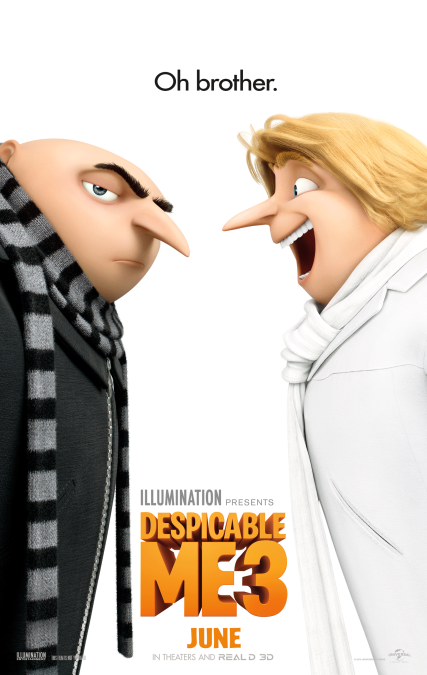 Gru and his crew are back and this time, he not only finds a formidable enemy but gets a major surprise in the form of a long-lost twin brother!

Having stepped away for good from his life as a villain, Gru is now a full-fledged member of the Anti-Villain League with his wife Lucy. When they are tasked with retrieving a rare pink diamond, they learn who is responsible for the theft. The culprit is Balthazar Bratt, a former 80’s child star who still relishes on his days as a top TV star where he played a villain hellbent on world domination. Despite all attempts, Gru and Lucy are unsuccessful in getting the diamond and as a result, they are fired from the AVL.

That’s only the least of Gru’s problems as his Minions decide to leave him after they are convinced that they can return to being bad guys, something Gru doesn’t agree with. However, Gru does learn of a shocking secret that he has a long-lost twin brother named Dru, who was raised by his father while Gru was raised by his mother. Upon meeting Dru, Gru is quite shocked not only because of his hair, but learns that Dru, who lives a luxurious life, longs to follow the “family” tradition of villainy. When Gru learns that Bratt has once again emerged, he finds it the chance to get his brother in on the action while regaining his status with the AVL. Will Gru be able to succeed?

Four years after his last adventure, Gru has returned in this hysterical third film that melds the long-lost brother angle with a nostalgic trip into the 80’s. Steve Carell does double duty this time around as both Gru and his brother Dru, who is seen decked out with long flowing blonde hair and decked out in white. The Minions, with the exception of two, take more of a backseat this time around as they have defected from Gru due to their hopeful attempt to return to villainy fails. As for Kristin Wiig’s Lucy, she tries desperately to earn the kids’ respect as their “mother”.

However, this time around, we have a villain in Trey Parker’s Balthazar Bratt, an 80’s child star whose hit show has merged with real-life. Sporting a mullet and a suit with shoulder pads, Bratt is just as hilarious when his entrance music including hit 80’s songs along with having a fixation for bubble gum. Add to the fact he uses a keytar with such amplification that it will literally tears clothes off as in the hilarious case of Gru in the film’s opening sequence.

Steve Coogan makes the most of his screen in two roles, first as retiring AVL director Silas Ramsbottom and Dru’s manservant Fritz while Jenny Slate brings a more cavalier and stern attitude as replacement AVL director Valerie Da Vinci. Miranda Cosgrove and Dana Gaier reprise their roles as Margo and Edith while youngest Agnes is now played by Nev Scharrel, who brings the “cuteness” to the film as well as the two remaining Minions who stay loyal to Gru with Pierre Coffin reprising the voices of those adorable “henchmen” of Gru.

Despicable Me 3 is a funny installment that brings a sense of nostalgia for 80’s fans meshed with the hilarious antics of Gru and his long lost twin. Definitely a fun family film that still brings it.