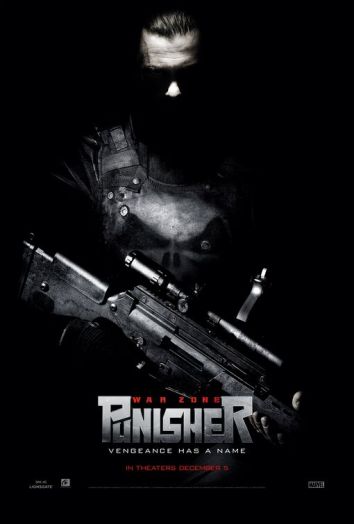 Ray Stevenson takes on the role of the iconic Marvel vigilante in the most recent film adaptation.

Frank Castle, a former Marine, had his life destroyed five years ago when his wife and children witnessed a mob hit and they were murdered in front of him. This led to Castle becoming a one-man army known as The Punisher. When his latest mission results in the killing of mob boss Gaitano Cesare, the mob boss’ underling Billy Russotti hides out. However, when Castle tracks down Russotti, he finds him and after a struggle, The Punisher throws Rusotti into a glass-breaking machine, permanently disfiguring him.

However, in the aftermath, Castle finds himself killing underling Nicky Donatelli, who is actually an undercover FBI agent. When Castle learns Donatelli has a wife and daughter, he attempts at forgiveness. Meanwhile, Russotti now has called himself Jigsaw and plots to not only destroy the Punisher but upon learning that Donatelli was an agent, he sets out to kill Donatelli’s family. At first contemplating retirement, Frank finds himself having to protect Donatelli’s family as well as unleash a barrage of punishment with the help of two unexpected allies while Jigsaw has his brother, Loony Bin Jim, ready to turn New York into a war zone against the vigilante.

First, there was Dolph Lundgren. Then there was Thomas Jane. Now, Ray Stevenson takes on the role of Frank Castle, the titular Punisher. In what can be said to be interesting casting, the flashback catalyst for the birth of the Punisher seems to be like that of the original comic book. However, the film also takes a piece of the 1989 film where in this case, we see Castle having been the Punisher already for five years and this was originally meant to be a sequel to the 2004 film but it was decided to retool the script and bring in a new Punisher.

The film was directed by Lexi Alexander, who gained fame with her 2004 soccer gang film Green Street Hooligans, which spawned two more action-orientated sequels. When Ray Stevenson was cast in the role, Alexander even took part in training Stevenson in weapons as she was a national martial arts champion. As Frank Castle, Stevenson brings a more stern hard-edged performance in which he didn’t need to emulate his predecessors Lundgren and Jane, but makes it his own and despite its comic-book style approach in terms of visuals, Stevenson actually is not a bad Punisher at all.

An issue with the three live action Punisher films is that being based on a comic book, they tend to bring villains who ham it up in a campy manner. Kim Miyori’s take as Yakuza leader Tanaka did it in the 1989 film and John Travolta did it as Howard Saint in the 2004 film. This time, we have not one, but two lead villains who truly ham it up with their performances. Dominic West’s Jigsaw brings the campiness to a tee but it is Doug Hutchinson’s Loony Bin Jim who truly takes the case as a really campy villain. Colin Salmon and Dash Mihok provide support as members of the “Punisher Task Force”, at first intending to take down Castle but ultimately must join forces with him while Wayne Knight provides a sort of “big brother” performance as Castle’s ally and armorer, Micro.

Unlike the previous films, the violence in this one is done in a grittier, brutal yet comical style that is akin to the comics. Guns are blazing and fists fly quite well in the film. There is even a group of goons who use parkour and in one of the most outrageous moments of the film, a parkour goon flipping off a rooftop is literally blown up mid-air by our vigilante hero. Think of the film as a meshing of throwback 80’s action mixed in with some of the comic-book influenced styling of today’s horror films or even Asian style action films.

Punisher: War Zone is definitely a comic-book like tale that once again has villains who ham it up to a tee. However, Ray Stevenson does make a pretty good Punisher, making the most of his screen time playing a determined yet tortured soul in the form of the Punisher.