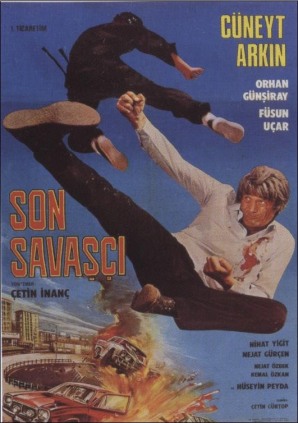 Turkish action cinema has quite the cult following due its combination of exploitation and its very exaggerative action sequences. The genre’s premier star, Cuneyt Arkin, stars in this very “bad it’s good cult martial arts film.

Murat is a high ranking police officer on vacation with a girlfriend, who loves him yet questions why he hasn’t committed to a relationship. However, Murat has been asked to end his vacation by his superiors because Turkish police have been asked by the German police to send their best man to help with a very dangerous case.

A rash of murders have been popping up in Germany lately. The murderer is believed to be a master Ninja and the reason Murat is wanted is because of his past. Murat served in the Korean War and during that time, he trained in the art of the Ninja. Only he is capable of defeating the Ninja, who is targeting a local criminal businessman.

Turkish martial arts action film can be summed up in one word…wow! It is obvious why this genre has cult value. The storyline borderlines on the ridiculous. It is understandable that a Ninja can defeat a Ninja, but why go all the way to Germany and why does Germany rely on Turkish police? Very strange, but that’s all part of the crazy world of Turkish martial arts action films.

Cuneyt Arkin, who wrote the film in addition to playing the lead, has a resemblance to perhaps Michael Douglas or even Ian McShane. Apparently he is Turkey’s leading action film star and of course, he proves to have the best acting chops of the entire cast. In the minimal time of her screen time, Fusun Ucar does okay as Murat’s girlfriend. However, one just has to laugh at Nihat Yigit’s Ninja character. Apparently, this guy was the “Turkish Bruce Lee”, complete with a trademark scream. The problem is that Yigit’s trademark scream resembled more of a Damon Wayans or Marlon Wayans scream rather than a Bruce Lee scream. It was that high.

Now onto the action of the film. It has to be mentioned that in Turkish cinema, they don’t seem to be afraid of copyright infringement at times. A car chase in the film was a combination of close up shots of Arkin driving and stock footage from the 1976 Hollywood B-movie Cannonball. As for the martial arts action, they are pretty much a hit and miss kind of deal. One can’t deny Arkin’s skills, but he tends to exaggerate sometimes with his moves, and overuses the “trampoline jump” quite a lot at times. Some funny bits are seeing him whince as he hits the camera. However, as for Nihat Yigit, it is apparently that he is in fact, a good martial artist. His fight scene against a karate master is nicely handled. However, the finale pitting Arkin and Yihat tends to be both good with a little of the bad. After all, from the subtitles, a Turkish sword referred to as a “katana”? No, but nevertheless, the action is ultimately a mixed bag that either works or doesn’t depending on your taste.

The Last Warrior is truly a campy Turkish martial arts movie. Cuyent Arkin does have pretty decent basic action skills. It is clear to see why films like this has definitive cult value and as someone who appreciates cult films, this one is a laugh out loud one at times but a fun Saturday night kind of movie.