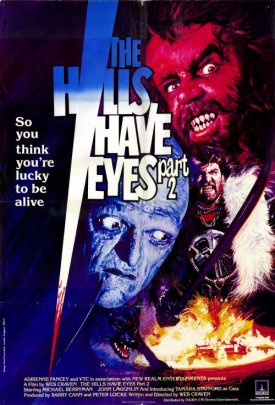 The late Wes Craven had unleashed a great horror classic with The Hills Have Eyes in 1977. It is somewhat hard to believe, but living proof that not everyone can make good films, as this sequel is a far cry from being close to the original.

During a psychiatry session, Bobby Carter, who survived a deadly incident seven years ago against a horde of cannibalistic dwellers in the desert, is still haunted by the events. Bobby and the now reformed Ruby, known as Rachel, have formed a motorcross team and have invented a super fuel for their bikes. When the team is scheduled to race in the same desert that Bobby and Rachel survived, Bobby’s PTSD forces him to drop out so Rachel takes his place and the team decide to head out.

The team consists of Roy and his blind girlfriend Cass, Harry, Foster, Jane, Hulk, and Sue. When the team drive on a bus and get lost, they take a shortcut but find themselves stranded by an old mining ranch. Soon enough, the nightmare has returned when Pluto, a survivor of the Carter incident, has returned and attacks Rachel, only for his one-time sister to fight back. However, Pluto is no longer alone as he has a partner in the Reaper, the older brother of the dead Papa Jupiter. As Pluto and The Reaper begin to take out the biker team one by one, the remaining must find a way to escape the desert, even if they have no other option to come face to face with the monsters Pluto and the Reaper.

When Wes Craven became a horror making force with Last House on the Left and The Hills Have Eyes, he put the stamp on his fame as a horror auteur with the creation of the legendary Freddy Krueger in A Nightmare on Elm Street. With this, when Craven opted to do a sequel to The Hills Have Eyes, he would pay attention to follow the 80’s slasher theme of offing a group of teenagers. The idea seemed pretty well but the overall result is nothing but extremely bad.

The problem with the film is that it suffers from too many flashbacks from the original 1977 film, in which we see members of the Carter family getting killed by the likes of Papa Jupiter and his clan. In a very dumbfounded move, they even Beast, the family dog, a flashback sequence. A dog! This truly is a screamable “WTH” moment. Craven later claimed that he was only able to get two-thirds of the film done with the final one-third comprised of the archival footage after finishing the film after the success of A Nightmare of Elm Street. Thankfully, both Wes Craven and Michael Berryman, who is one of three returning cast members, have since disowned this film.

Aside from Craven and Berryman, Robert Houston would mercifully only appear in the opening of the film while a major plot hole involves the fate of Janus Blythe’s reformed Ruby, who was the only sympathetic member of the clan in the original film. The problem with Berryman’s Pluto is that he is more of a wimp in this than he was in the original film. The killings are the work of the 7-foot monster the Reaper, played by the late horror film actor John Bloom. If there can be one positive thing about this film, it is that of Bloom as the Reaper, who just unleashes fury to show that the clan is still around. While it is somewhat welcome to have Berryman return, Bloom truly stands out as a one-man killing machine against the teens in this film, using various methods to off them.

The Hills Have Eyes Part 2 is altogether a very bad sequel and the fact that Wes Craven’s name is on this proves a sense of shock value on its own. Yet, he redeemed himself in terms of this when he co-wrote the sequel of the remake with his son in 2007. Yet, the one redeeming factor is the menacing Reaper, played by John Bloom as his killing spree mercifully makes the film end quickly.