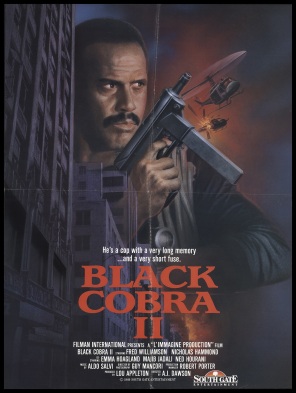 Fred Williamson returns as the hard-boiled Robert Malone in the second installment of the Black Cobra trilogy and he has an ally in a former web-slinger. That’s right, Nicholas Hammond, who played Spider-Man in the short-lived 1970’s series, joins the Hammer in this film.

Det. Robert Malone has found himself in hot water again after taking down a group of thugs using his own methods. The new captain, Marton, is unbelievably ticked off and as part of an “exchange program” with Interpol, sends Malone to the Philippines, where he must learn how Interpol does their police activity.

The duo find that the Colonel has a daughter, Peggy, who is a lounge singer. They inform her of her father’s death and she is not surprised at all. The trio soon learn that the Colonel was involved in a deadly conspiracy with a local Arabic businessman, Asad Cabuli, who is actually the leader of a terrorist faction. When Peggy is kidnapped, McCall and Malone, once at odds over their tactics realize they do work better together, team up to catch the kidnappers but it is too late as Peggy dies. When McCall’s son is kidnapped and held hostage along with his classmates by the faction, the duo now must unite again to put an end to the faction once and for all.

The first Black Cobra was quite a pretty interesting rip-off of the similarly-titled Cobra. Here, in an attempt to perhaps save some budget money and to cash in on Fred Williamson’s action hero status, this sequel takes our hero to Manila of all places. The film soon becomes a buddy action film with the once “lone wolf” Malone now having a partner and one who, in this formulaic genre, the opposite of his character. And who would have thought that his new partner would be played by the former Fredrich Von Trapp, or better yet, Peter Parker?

To make the buddy action film work, the two partners have to have a sense of chemistry that works despite playing opposite characters and here, even for its B-movie status, this one works quite well. While Fred Williamson plays the unorthodox, lone wolf-style Malone, Nicholas Hammond does really well as the by-the-book agent Kevin McCall. The two sometimes bicker like an old married couple due to their difference in handling matters. However, once they realize how dangerous this game is, the two learn a thing or two from each other and have to rely on each other to get the job done and it works here.

The only flaws in the film are that once again, the female protagonist is relegated to doing virtually nothing to make an impact and is even killed midway through the film and the lead villain of the film is more forgettable than the first installment’s villain. Here, the character of Asad is more of a mastermind who lets his goons do more of the physical work in the film. Unlike Bruno Bilotta’s tough as nails gang leader in the original, Najid Jadali just doesn’t give as much toughness in the film but rather resorts to screaming and planning out the attacks.

Even the action seems at times to be subpar. Williamson, who is a martial artist, fights mainly Filipino stuntmen who just take the fall. Seeing him in the film Hell Up in Harlem, he had a nice jumping roundhouse kick. However, his roundhouse kicks here just don’t seem to match up well as they look sort of bad. Perhaps it is because of the outfit he sports during the fights, who knows. In addition, while he kicked a guy through a window in the original with a flying side kick, in this film, he does a front kick to a guy through a stash of boxes on the docks. The final action piece is mainly some fights mixed in with firepower as the usually suit-wearing Hammond, for one reason or another, goes in like Rambo on his part with Williamson in his usual tough action gear.

Black Cobra 2 suffers from a forgettable villain and again, a forgettable female protagonist. However, it’s redemption comes in the form of the buddy action chemistry between “The Hammer” and the former “Spider-Man”.