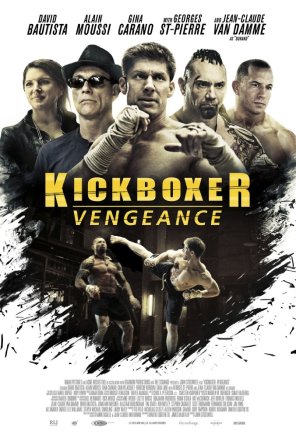 At long last, the remake to the 1989 Jean-Claude Van Damme film has arrived? It is a worthy remake? You bet it is. Despite some flaws that may hinder the overall quality, the film is an excellent vehicle for martial artist and stuntman Alain Moussi, who proves himself worthy of a lead role.

Three months ago, Eric Sloan won the Global Karate Championship with the help of his younger brother and trainer Kurt. Marcia, a fight promoter, invites Eric to fight in an underground match in Thailand for $400,000. Kurt is not sure it is the best idea, but Eric decides to go for it and leaves for Bangkok without his brother. When Kurt gets a plane ticket to Bangkok on the night of the fight, he arrives to see his brother decimated and ultimately killed by the undefeated Muay Thai champion Tong Po. Kurt knows that Marcia had set Eric up and an attempt to seek revenge on Tong Po, makes Kurt a fugitive when he is helped by Liu, a Thai cop who is looking to destroy Marcia’s underground fight ring.

Liu takes Kurt to the home of Durand, who was Eric’s Muay Thai trainer. Kurt is convinced that Durand can be the one who can train him to avenge Eric’s death. Durand at first refuses, but he sees that Kurt has the heart and willingness to do what it takes and therefore, puts him under grueling training. Liu does not want Kurt to fight Tong Po, fearing he will meet the same fate as Eric. However, with vengeance on his mind, Kurt is put under test after test to prove himself worthy of challenging Tong Po to a match. When Kurt passes the final test, the match is set between Kurt and Tong Po? Who will win or much rather, survive this final confrontation?

Remakes are quite an interesting subgenre of any film. Some are worthy of its original (such as The Departed, which remade Infernal Affairs and My Bloody Valentine) and some not so much (2008’s Hollywood remake of My Sassy Girl). At last, we have the long-awaited remake of Kickboxer, the 1989 film that helped solidify Jean-Claude Van Damme’s reputation as a viable action star. So how does it fare when compared to the original? While the film truly nods to the original, the film adds new elements that help make this a worthy reboot, which is what is intended according to co-writer and producer Dimitri Logothetis.

A new star is truly on the rise in the form of Alain Moussi. The Canadian martial artist and stuntman makes his lead role debut as Kurt Sloan, the role originated by Van Damme in the original. Moussi definitely has the skills, has the look of an action star, and can do his own stunts, which is exactly what he delivers in the role. For a debut lead role, Moussi does quite well in the role of the avenger, who undergoes a series of challenges to make himself worthy of fighting the deadly Tong Po, here played by former WWE superstar turned actor David Bautista.

At first hearing of Bautista playing Tong Po, one can imagine people saying, “Are you kidding me?” However, it must be said that Bautista actually does have a martial arts background, which is why he may be considered Tong Po as “beast mode”. Trained in Kali, Brazilian Jiujitsu, and Muay Thai, Bautista’s Tong Po is reminiscent of Van Damme in No Retreat, No Surrender. He doesn’t have much screen time, but makes the most of what he has, especially in the two important fights of the film against the Sloan brothers.

Gina Carano, known as a top MMA fighter, goes straight in the role of a female version of the original Freddy Li, fight promoter Marcia, who uses her financial influence to hold the underground fights. While some may have wanted to see her fight, they will be disappointed here. Thai-American model and actress Sara Malakul Lane is okay as Thai detective Liu, who ends up becoming Kurt’s love interest. However, the issue is that it doesn’t lead up as expected as Van Damme’s Kurt and Rochelle Ashana’s Mylee in the original. It happens pretty quick and in a shocking and awkward moment, Liu tells Kurt he doesn’t have to fight Tong Po and this leads into a very awkward love scene that was just unexpected.

The film would also mark the final appearance of a great talent. Darren Shahlavi, who passed away in January 2015, makes quite the impact as the ill-fated Eric Sloan. While his only fight in the film would be against Bautista and we all know how that ends up, it is his words to Marcia about Kurt that helps Kurt realize that Eric was looking out for him and he knows that Kurt would do anything for Eric. The filmmakers dedicated the film to Darren’s memory and to this day, he is still missed as a wonderful guy who lived his dream.

Now, before we get into the action, it must be noted that there are a few flaws that may hinder the overall quality of the film, depending on one’s taste. First, we have the appearance of MMA legend Georges St-Pierre, who plays Kavi. While he has shown his skills on screen, such as the opening fight as Batroc the Leaper in Captain America: The Winter Soldier, he comes in sporadically as someone who may be working for Tong Po, but also has some respect for Kurt after their fight, which opens the action portion of the film. The other flaw? It is not so much as Jean-Claude Van Damme’s Master Durand as he comes full circle from playing Kurt in the original film to now playing the master (replacing Thai action star Tony Jaa, who dropped out due to schedule conflicts). In most of the film, perhaps due to his schedule or whatnot, his voice is dubbed but not exactly in a good way. In some parts, we hear Van Damme’s actual voice which works, but the dubbed voice sounds like a poor man’s Van Damme and that’s not exactly a good thing.

Finally, how is the action of the film? This is the piece de resistance of the film, thanks to Larnell Stovall, who has proven himself to be one of the most sought after stunt specialists in Hollywood today. He would also coordinate the stunts with Thai stunt coordinator Supoj Khaowwong and Emmanuel Manzanres assisting. Not only does the action pay homage to the original film, but we also get homages to some of the action of the late Thai stuntmaster Panna Rittikrai (Khaowwong was a protege of Rittikrai, who passed away in 2014) with Moussi emulating the likes of Tony Jaa in two fight scenes that occur on the streets of Bangkok. Van Damme and Moussi have a few training fights together and Van Damme still shows despite his past troubles, he truly looks quite good here. Moussi gets to take on the likes of St-Pierre and T.J. Storm to open the film and we even get to see The Martial Arts Kid‘s Matthew Ziff have a brief fight scene using double swords as Tong Po’s fighter Bronco. The finale between Kurt and Tong Po is great as Stovall truly melds his style of action with that of the original 1989 film, showing both Moussi and Bautista as ample and worthy fighters.

Stay quickly for the credits as we see Moussi pay homage to one of the funniest scenes of the original film, and we all know exactly what that scene is. However, the shocker of the film comes in a very special cameo that cannot be spoiled here, but is brief yet quite jaw-dropping.

In conclusion, despite a few flaws, Kickboxer: Vengeance is truly a worthy reboot and new vision of the original 1989 Jean-Claude Van Damme film. With nods to the original and the likes of Ong-Bak, the action is great and brings in a worthy new action star on the rise named Alain Moussi. In addition, David Bautista is great in his screen time as Tong Po.