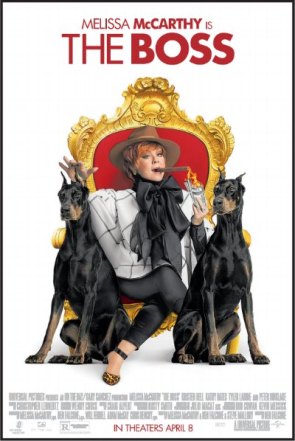 Melissa McCarthy, the current comedy queen, is back with a new film that revolves around the world of business and one woman’s attempt to return to get her life back together.

Michelle Darnell may not have never had a family, but she didn’t need one with her business deals that made her the 47th richest person in the United States. However, after a very heartbreaking interview on Gayle King which made her leave the show early, her life begins to crumble when she is arrested for insider trading. After serving a five-month sentence, Michelle is out of prison, but has lost everything and virtually everyone in process. There is only one person she can turn to, her former assistant Claire.

Claire, thanks to the support of her 12-year old daughter Rachel, reluctantly takes Michelle in so she can get back on her feet. Michelle tries out one of Claire’s homemade brownies and loves it so much, she may have found the perfect plan to return to her position. With help from Claire, she creates Darnell’s Darlings. However, she finds some competition in Dandelions den mother Helen but finds an even bigger threat in former boyfriend turned business rival Renault, who is the one who made her lose everything in the first place.

It goes without saying that Melissa McCarthy is big-screen comedy queen today. Fans are either going to love her or hate her. This reviewer is with the former group because she doesn’t have to be all glammed up and can do both verbal and physical comedy, which she pulls off in this film. In this film, McCarthy and husband Ben Falcone (who makes a cameo appearance as Michelle’s lawyer) took a character she created when she was in the comedy troupe Groundlings and not only shows the madcap comic style that is akin to McCarthy, but something deeper along the way as well. Which would explain the opening of the film.

The opening of the film shows a 5-year old, a 10-year old, and 15-year old Michelle getting dumped back to the orphanage (playing the 10-year old Michelle is Melissa and Ben’s daughter Vivian). Michelle always felt she never needed a family and it is because of that childhood trauma if you will. And when the topic of family comes up, she starts to become nervous. This is notable when Michelle’s mentor, played in a cameo by Kathy Bates, mentions that she felt she was family and a later pivotal scene in the film.

What even helps in the film is the chemistry between McCarthy and Kristen Bell, who plays former assistant Claire. These two play off each other quite well, from McCarthy’s vamped up style complementing Bell’s squeaky clean brashness. A very funny scene in which Bell prepares for her first date in years shows just how well the two play each other. Tyler Labine has fun with his role of Mike, who potentially becomes Claire’s love interest; Annie Mumolo is funny as the very uptight Helen with the breakout scene, a street rumble between Darnell’s Darlings and the Dandelions is quite funny thanks in part to Todd Bryant’s fight choreography. Not to mention, Peter Dinklage even holds himself quite well as the vengeance-seeking Renault, the cause of Michelle’s problems and eventual change.

The Boss is a pretty funny movie thanks mainly to the chemistry between Melissa McCarthy and Kristen Bell. Peter Dinklage is funny as the villain, and that street rumble takes the cake. Bottom line, if you love Melissa McCarthy, you’re going to like this film.