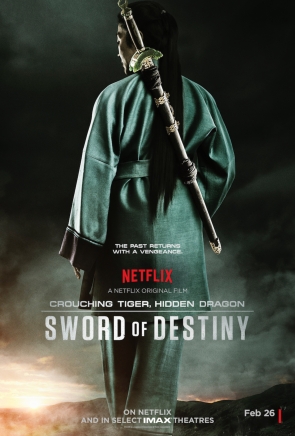 Does the long awaited sequel to the 2000 Academy Award winning wuxia epic match its predecessor? While it lacks the aesthetic charm of original helmer Ang Lee, one must see this film differently through the eyes of director (and original film action director) Yuen Woo-Ping.

It has been eighteen years since Yu Shu Lien lost the man she fell for, Li Mu Bai. Living a life of solitude, she is asked to return to the House of Te, where the Green Destiny Sword is hidden. The sword’s legend is that anyone who possesses it may become the ruler of the martial world. One such warlord, Hades Dai, believes in the legend and will go to great lengths to get his hands on the sword. This includes sending his youngest disciple, Wei Fang, to retrieve it for him. However, on the night Wei Fang attempts to steal the sword, he is stopped by a young woman named Snow Vase, who attempts to steal the sword herself. However, when the noise from their altercation is heard, Snow Vase convinces the House of Te that Wei Fang did try to steal the sword and is therefore, confined.

Meanwhile, the mysterious Silent Wolf, Meng Si-Zhao, has learned of the potential robbery of the sword and seeks out the greatest fighters who follow the Iron Way. He finds his allies in Silver Dart Shi, Thunder Fist Chan, Flying Blade, and Turtle Ma. It is also revealed that Meng was actually betrothed to Yu Shu Lien, but her feelings for Li partly got in the way and she fears that the same fate could await Meng. Even more the shocking, Snow Vase, training under Yu Shu Lien, may in fact have a connection to Wei Fang, but what exactly is it and will it impact Hades Dai’s quest for taking over the martial world?

When Ang Lee unleashed Crouching Tiger, Hidden Dragon back in 2000, he brought a balance of wuxia pian style martial action with a story of love and the potential consequences that can transpire when attempting to keep the love stabilized. In other words, it was a martial arts tale revolving around fate. Fifteen years later, we have finally come upon the sequel, which took years to develop. The question is, does this film have the arthouse-like balance of storyline and action like its predecessor?

Sadly, the answer is a resounding no. While Ang Lee gave his blessing to Yuen Woo-Ping, who choreographed the action of the original film, it is clear Yuen has the inability to bring in a determining story to balance out the action. Instead, John Fusco’s script, and he does get an A for effort, makes the love and fate story minimal and makes the film feel like a more straightforward wuxia pian film. The feel of the film is reminiscent to films such as Brotherhood of Blades and White Haired Witch. It might have touches of the love story that made the original film what it was, but seemed to rely more on its action sequences if anything, and in Yuen’s case, it’s not necessary a bad thing. However, there should have been more touches of character development with this film.

Chemistry is very important when it comes to on-screen couples and that is one of the major issues of the film. This is the first time that lead actors Donnie Yen and Michelle Yeoh have been on-screen together since the 1994 martial arts film Wing Chun (also directed by Yuen). The major problem is that viewers expecting Michelle to feel for Donnie like she did for Chow Yun-Fat in the original will be sorely disappointed. Perhaps it is because of Michelle’s character preferring a life of solitude? Perhaps it is because the script just rushes at times? In any case, by the time Michelle finally warms up to Donnie, it just seems too late.

The two actors who really stand out in the film are Glee‘s Harry Shum Jr. and newcomer Natasha Liu Bordizzo as Wei Fang and Snow Vase respectively. Granted, they don’t have a love story that could even rival Zhang Ziyi and Chang Chen of the original film. As a matter of fact, they don’t really seem to have a love story of sorts. Their on-screen together may seem like a bickering couple at times, but when it all makes sense, that seems to have the real drive of the film. Meanwhile, Jason Scott Lee is quite menacing as lead villain Hades Dai, but don’t expect any good action from him until the climax and Eugenia Yuan (daughter of original CTHD actress Cheng Pei-Pei) is quite scary looking as the Blind Enchantress with Hollywood veteran Roger Yuan making the most of his scenes as Iron Crow, Wei Fang’s father figure and martial arts teacher.

If there is any reason to see the film, the action scenes are actually not bad. Expect the wire-fu like action akin to the original, but there are some pretty inventive fight scenes in the film. Aside from the sword fights, the introduction of Juju Chan, Chris Pang, Woon Young Park (good to see him as a good guy for once), and Darryl Quon’s characters is quite a fun sequence along with the ice pond fight pitting Silent Wolf against two opponents. The climactic battle scene is okay, but at times, seems a bit reminiscent of a ho-hum, seen that type before kind of vibe. Look out for The Rebel and Clash actress Veronica Ngo as a very top notch fighting villain in Mantis.

The bottom line is if you plan to see this, don’t expect anything like Ang Lee for this film. Instead, see Crouching Tiger, Hidden Dragon: Sword of Destiny as more of a straightforward wuxia pian with very minimal touches of character development.