Ali Zamani knew filmmaking would be a lifelong passion. From spending his childhood at his father’s video store in Sweden to making short films during his teen years, Ali would eventually earn a Bachelor’s Degree in Film, Video, Media, and Society followed by a Master’s Degree in Mass Communication. Since forming AZ Films with his brother Zeus, Ali has worked in music videos, commercials, short films, and feature films. One of those feature films, 2018’s Opus of an Angel (which made the Top 10 of WFG’s Films of the year), is getting a nationwide release on July 28.

WorldFilmGeek had the opportunity to interview Zamani via e-mail about his experience on the film. 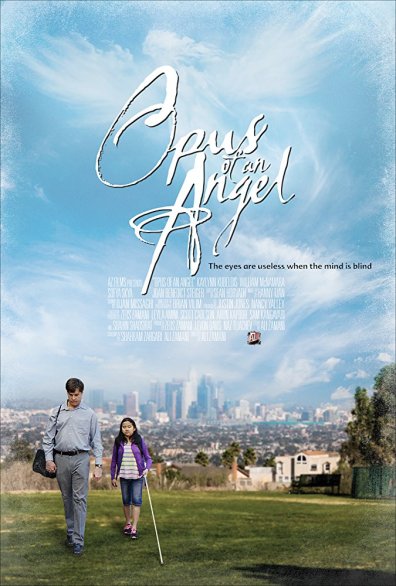 Ali, thank you so much for take the time to talk about Opus of an Angel. This was a beautifully made story of redemption and was very heartwarming.
It’s my pleasure and thank you for taking the time; I’m glad you enjoyed watching our film.

What inspired you to come up with the film?
I was always inspired by the thought of how someone would deal with the notion of losing everything that was so dear to them, what triggered them, when they were at the lowest moment of their life, to turn to suicide, and what stories they had to tell. One day, while I was out for coffee, I saw a special education class on a field trip. One child was visually impaired but had an infectious smile … life seemed to be so beautiful to her. It got me thinking of how these two extreme outlooks on life, if touched, would they be able to influence each other and to what extent.

William McNamara is a wonderful actor whose work has been seen for years. What was he likes on the set?
Being a veteran and conventionally trained actor, William brought a well-polished performance whereas Kaylynn brought an extremely natural and organic performance due to the Maria character being so like her own character. The chemistry between these two approaches really meshed together well, even though in an awkward fashion, which further emphasized the two-character’s unlikely relationship in the movie. William’s intensity and focus when it comes to truly feeling the pain of his character shines through the film from beginning to end! He’s a phenomenal actor.

The film’s breakout star for me is Kaylynn Kubeldis, who plays Maria. How was she discovered?
For the role of Maria, I felt it was important to cast a person that was visually impaired to try to not only give the film a sense of authenticity but also be able to get an insight into the ‘perception’ and world of people with such a disability. Junior Blind of America, an organization based out in Los Angeles, was invaluable to our casting efforts for the role of Maria. When we reached out to them for recommendations of potential students that could play the part of Maria, Kaylynn’s name was the first on the list. We actually auditioned more people for the role than I can count, but when I met Kaylynn in person it felt like I was actually meeting Maria. She read for the scene and I got goose bumps. It was abundantly clear to everyone in the room that the role was meant for her.

How long did production take and were there any challenges you faced during shooting?
Production took over six weeks and due to a lot of locations in Los Angeles appearing in the story we had logistical and availability challenges throughout the process.

Finally, are there any new projects in the works that you can talk about?
I’m currently developing a concept based heavily around Artificial Intelligence and the emotional connection between humans and robots in the future. Excited to share more details when I can….of course!

A Special Thank You goes out to Liz Rodriguez at EMR Media and Ali Zamani for making this interview possible.