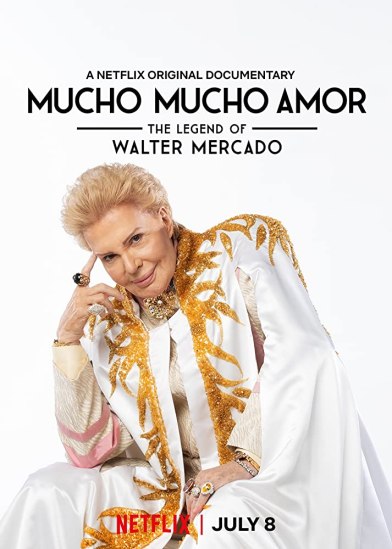 He was the world’s greatest astrologer, and for a long time, he disappeared from the spotlight. What happened? Where did Walter Mercado go? The answer is revealed in this riveting documentary.

Walter Mercado was considered the world’s greatest expert on astrology. Before finding worldwide fame in the profession, Mercado knew that he had something special since childhood. A gift. However, he started as an actor in many local telenovelas and stage shows in his native Puerto Rico. When he was asked to promote a play he was working on, he was asked about his love of astrology. The rest is history…or is it?

Walter’s rise to the top has been seen all over the world and attracted the attention of Bill Bakula, who would become Walter’s manager. As Walter continues his rise to the top, attracting attention all over the world, he is met with being imitated and parodied, a situation that made him at times uncomfortable. However, it is nothing compared to what happened when he blindly signed a contract that gave his manager the trademark to the name. As Walter decided to go off on his own, the legal ramifications have taken its toll on him and he simply disappeared. Six years and a heart attack later, Mercado returned to full form up until his passing in 2019. However, his legacy as an international icon will remain intact forever.

It looks like documentaries have become the rage now and what’s even more amazing is that nowadays, filmmakers tend to want to get the full story of their subjects when it comes to certain actors. For this film, directors Cristina Constantini and Kareen Tabsch delve into the history of the legendary Walter Mercado, who passed away in November 2019 at the age of 87. However, where documentaries such as this will sugarcoat certain aspects, the duo of filmmakers don’t hold back and we get to hear plenty from not only Walter Mercado himself, but a lot from his assistant/sworn brother Willie Acosta and his nieces as well as superfans/Latinx celebrities Lin-Manuel Miranda, Jorge Ramos, Raul de Molina, and Eugenio Derbez.

The film gives the viewer a first-hand look at his life at home, with Willie and his dog, which brings a bit of laughs. There is also the topic of his sexuality, in which Walter coyly responds he is one with the wind and this is where Willie put it best to the viewers. He states that Walter takes a certain pill called an “I don’t care pill” and that he takes it too. In other words, Mercado and Acosta don’t care what people assume and they can think what they want, but as long as they are happy so be it.

There is also the topic of Mercado getting parodied by those and certain jokes do make him feel uncomfortable. However, in the case of comedian and actor Eugenio Derbez, his parody of Mercado on his old hit show XHDRBZ was done more out of respect for him because he had always been a fan of him. Derbez followed the famous saying, “Imitation is the best form of flattery” while others tend to use their shticks as a means to just make fun of the guy.

The film does look at the serious nature of the now destroyed relationship between Mercado and former manager Bill Bakula. Bakula seemed like, at the time, one of those guys who only cared about the green and thus, exploited Mercado. He introduced Mercado to the world of caviar and private jets, but there was something deep beyond that and in 2006, all was revealed when Mercado ended his relationship with Bakula, which led to the 6-year litigation of using the trademark name of “Walter Mercado”. Eventually the two came to a settlement and despite temporarily changing his name to Shanti Ananda in 2010, Mercado retained the use of his name in 2012.

A very vital part of his life is the meeting of famous celebrities, especially those who have been fans of his for many years. His meeting with Lin-Manuel Miranda in early 2019 was a fan’s dream come true. The star of Hamilton met one of his greatest idols in person and it is great to see this as well as an interview with legendary reporter Jorge Ramos. We then delve into his final on-air performance and his exhibit on his career at the HistoryMiami Museum which was met with extreme rave by friends, family, and fans.

Mucho Mucho Amor: The Legend of Walter Mercado is an amazing documentary on an international icon. Walter Mercado is one of the greatest Latinx legends to ever grace the world with his expertise on astrology and his flamboyant costumes, and well-natured approach to life. The world still misses Walter Mercado to this day and we still will remember the famous words: ”Paz. Mucho Paz. Pero Sobre Todo, Mucho Mucho Amor”. Words that will never be forgotten.