The son of Award-winning composer Barry DeVorzon, Michael DeVorzon broke out in the mid-1990s on television in supporting roles before working on feature films and short films mainly in supporting roles. However, he takes the lead role as an ex-racer who is forced to face his past to pay off his brother’s debt in Fast and Fierce: Death Race, now out on VOD and Digital from The Asylum.

WorldFilmGeek had the chance to talk to Michael about this wild ride of a film. 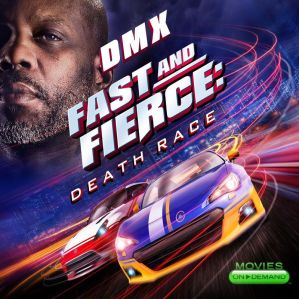 Michael, thank you so much for taking the time to talk about Fast and Fierce: Death Race. From the title, it seems like a ripoff of two racing franchises, but it actually holds its own story and was done well for what it was.
Thank you so much! I’m glad you liked it. The original title was In the Drift. I wasn’t aware of the new title until a couple weeks before they released it. I think it gets your attention and obviously, there was a marketing strategy behind it as well. I knew what we were going into and we tried to make the best street racing action movie we could on the budget we had.

How were you approached to play Jack Tyson?
I worked with Jared Cohn [the film’s director] on another film, a thriller, which I believe is getting released later this summer. It’s a very different character. A devil in disguise. We had a very good rapport on that film. He really believed I had this character in me and in the casting process, he was really fighting for me to get the role. The producers at the Asylum really liked what I did on the audition tapes, but they had never worked with me before, but it was Jared who pushed for me to get the role.

What was your approach to the role?
How I approached taking on the role of Jack was, first of all, I had very little time to prepare. We were shooting at a blistering pace on a really tight schedule. When I read the script and saw the arc of the character, I related to him right away. My life has not been a straight line. I’ve zigzagged all over the place and been through some things. When you’re shooting at that kind of pace, many times you only get one or two takes to get it right. There’s very little room for error. We didn’t have the luxury of spending a half a day on an important scene to make sure we got it right. I had to be really on my toes.

We got the scripts the day before shooting. I read it a couple of times and when we started shooting, I tried to focus on preparing for that day. I was taking it one step at a time. For me, it was about being alert. A lot of time on sets, you’re waiting around for hours and shooting for s**t, eating potato chips [Laughs]. But, I didn’t have time to talk to anybody because I had so much to do in one day. I spent a lot of time with Paulina Nguyen [who plays Bianca], because we had a lot of scenes together. We really focused on the script, but we also had time to bond when we weren’t shooting.

I had my head in the script during the whole shoot. I would go to hair and make up and get back to the script. I would run lines with whoever I was doing the next scenes with. There’s a lot of action, lots of driving. Then, there’s scenes where in an ideal world, there would be the character exposing a deeper inner world. It’s a break from the action to get to know the character. There were some emotional scenes in the movie as well. Time was of the essence, so I just hoped I was able to go where I needed to in the moment.  I’m especially grateful for those scenes.

Can you tell me about your experience with precision driving.
I’ve had a long history with cars. I started driving stick at age 12 and had the opportunity as a young man to drive high end sports cars. I was very comfortable in the cars. I’ve done a number car commercials where I had the opportunity to do some precision driving. I did one for Porsche and they weren’t sure what kind of driver they were getting. They originally just hired me as an actor and I always like to tell this story. because before we went to San Francisco to shoot, at the wardrobe fitting, the director had asked me how my driving skills were and I said they were good. He did a double take and said don’t worry, you have the job. But really wanted to know about my driving skills were and I told him again they were good. It’s funny because sometimes actors will say they know how to operate a rocket to get a job.

And then it’s revealed that they don’t.
Right! Right! They said it just in hopes of getting the job. So knowing actors are going to say that, the director doesn’t know what to believe on set. Early on, they tested my skills and I ended up doing most of the precision driving on that shoot. So I’m very comfortable with cars and I got to do quite a bit precision driving in the film. I’m comfortable at high speeds [Laughs]

How did you approach the dramatic scenes of the film?
I always try to bring myself to a character. I’ve had my fair share of pain, loss, and regret. So, I try to tap into that.

What was it like working with director Jared Cohn? Did he give you free rein in how to bring the character to life?
Yeah! Very much so! Jared and I had a great rapport on the first movie we did. He’s really good about letting his actors do their thing. When a scene is not quite working or off-course, Jared will come in and give direction to steer it back where it needs to be. We worked on pacing and urgency, which was important, being this was an action film.

What Jared is really brilliant at is blocking an action scene. There were some action scenes like the fight scene and the ambush scene where there were multiple actors and moving parts. Knowing how quickly we had to do everything sometimes I would say to myself how the f**k we are going to go through this [Laughs] But he’s incredibly efficient in those moments. He would be directing all these moving parts, and before I knew it, we would be getting ready for a take and I would be like ‘holy s**t. We’re going to do this’ [Laughs]

The villain of the piece, Davie, is played by DMX. What was it like working with him in your scenes together?
Oh man! We started rapping together! [Laughs] I’m just kidding! That’s what I wish I could say. I grew up in the music business and I’ve been a rap fan since 1987 and DMX is a legend. It was great to work with him. He’s got a really big personality and I had never met him before. He’s got this big on and off stage persona and I wasn’t sure what to expect. He was very cool, down to earth and humble. When we first met, he had just done a scene where he is talking about me and when I introduce myself as Jack, he was like, “Oh man! You’re Jack! I was just talking about you!” [Laughs]

He was a true professional. There was no drama on the set. It was let’s get it done and get it right. Then we had the scene towards the end of the movie where I had to do something to him. We were trying to figure out how to get the scene right. I wish I had more time to get to sit down with him and talk about life and music. It was great having him on set and I’m grateful he was part of the project.

It sounds like it was mostly the time factor that was the biggest challenge while shooting. How long did shooting take?
I would prefer people to watch the movie first then talk about how long we had to shoot it.

Like the title indicates [Laughs]
Yes, it was absolutely fast and fierce! [Laughs] If I told you how long shooting took, you would say no f**king way. You’re f**king lying! [Laughs]. We were blazing through pages like I’ve never seen before. I’m amazed that we have something that I  hope is entertaining and has some heart.

With time constraints, it reminds me of the old days of Hong Kong films. I’ve heard stories where they shoot films in 7 days and that’s what this sounds like in some way.
Yeah, I’ve heard that too. They don’t have so many rules there, so they can shoot like 18-hour days.

Do you usually play these type of characters?
I tend to play characters who are complex and sometimes capable of menace. So, it was refreshing to be the hero granted he’s a badass. He’s still a good guy. I was honored to play that character.

Finally, are there any new projects you can talk about that are in the works?
The first film Jared and I worked on is a thriller. It’s going to be a TV-movie of the week and it is supposed to come out in August. I’m the male lead in this film. The character appears to be this ideal guy but he’s really a psychopath. It was also a really fun film to make.

In addition to that, I’m also very focused on writing. I’ve finished my third feature script and I wrote a dark comedy for TV that I’m developing. My dad is a songwriter so to be able to tap into the creative side of writing has been wonderful. I really enjoy the writing process and I’m hoping to get these movies made and see where it takes me.

That’s awesome! Fast and Fierce: Death Race is now available on Digital and On Demand. This is a pretty fun and wild ride with Michael DeVorzon and DMX. Michael, thank you so much for talking about the film.
Thank you for having me!

A Special Thank You goes to October Coast PR and Michael DeVorzon for making this interview possible.