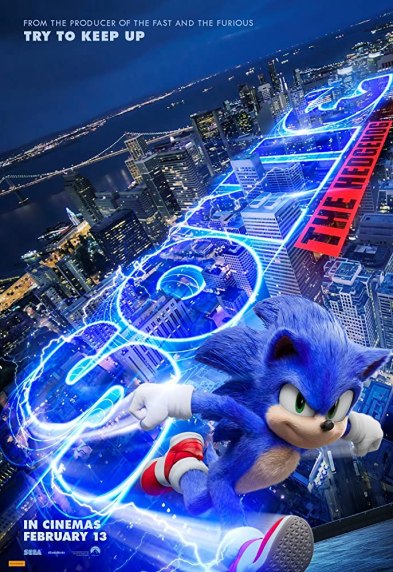 Sega’s iconic hedgehog comes to live-action form in this fun and wild adventure that is just heightened by a return to form Jim Carrey.

Sonic is a young alien who has very special powers and when his powers are discovered on his home planet, he is forced to disappear. Ten years later, Sonic hides incognito in a forest in the small town of Green Hills, Montana. There, he has seen and shown respect for local police officer Tom and his girlfriend Maddie. However, he still shows feelings of loneliness. When he gets upset one night after playing baseball with himself, Sonic unleashes his full power and accidentally cuts off all power in the area.

When there is no explanation for what has transpired, the government decides to unleash their secret weapon to investigate. His name is Dr. Ivo Robotnik, a genius is who also completely mad and intends to see the source of the power outage. Meanwhile, Sonic, in a futile attempt to escape, accidentally meets Tom face to face for the first time but loses his prized possession, his transport rings, in San Francisco. A reluctant Tom decides to help Sonic, all while evading Robotnik, who learns about Sonic and plans to use his powers for his own agenda of domination. Will Sonic be able to stop Robotnik or will it be too late?

The story of bringing Sonic, Sega’s iconic speedy hedgehog to life has been quite a very interesting road. When it was first announced, there may have been those who felt like it should have been done earlier as Sonic has been around since 1991. Soon enough, he became Sega’s iconic mascot and has been around since his inception. Then, it was announced that Deadpool director Tim Miller would serve as a producer. When the film finally was one and done, this was when the poop almost hit the fan as fans were totally unhappy with the redesign of the legendary icon. Giving him a more human-hedgehog look, many were appalled, and they voiced their opinions. Paramount agreed that he needed his old school look and decided to delay the film to fix up Sonic’s look. Was it worth the wait? You bet it was!

What’s even more outstanding that the redesign of Sonic in giving him his classic 90’s look with great voice work by Ben Schwarz, who plays Sonic as a late-teen who is looking for a family as he feels alone in the world? It brings back another form of 90’s nostalgia as we get the return of old school Jim Carrey. While Carrey has done his share of renowned detraction roles such as The Truman Show and The Number 21, many miss that 90’s style Ace Ventura, Liar Liar style that made Carrey comedy gold. As Robotnik, Carrey is back on top in old school form bringing back his signature form of ourbursts, wise cracks, and physical humor that we all needed from him once again.

The chemistry between Sonic and cop Tom, played by James Marsden helps drive the film as this is also a part-buddy road trip movie. Marsden has a bit of a subplot as his character hopes to move from his small town to move to San Francisco to work in their police force. For him, it is a dream hopefully to come true and coincidentally, it is thanks to a shirt he sports after hitting Sonic with a tranquilizer dart in their first meeting, that he feels a bit responsible and goes to where he hopes is his eventual home. Sonic even introduces the audience to the character as “Donut King”, as well, the stereotype of cops is clearly implied.

Sonic the Hedgehog is a fun and wild adventure with Sonic’s design looking better than initially conceived, great voice work by Ben Schwartz, and the triumphant and glorious return of old school Jim Carrey as Robotnik. With its success, I hope there will be a sequel and if there is, check out the mid-credit sequence to see another familiar face.