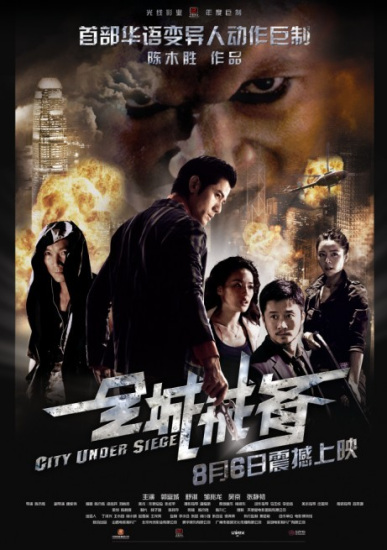 From the director of New Police Story comes this homage to superhero-style films that is best described as somewhat goofy yet somewhat still fun.

A group of Hong Kong circus performers are in Malaysia for a show. When the circus’ emcee Sunny Li breaks character and attempts to use his Flying Dagger technique for the crowd, he finds himself upstaged by Cheung Tai-Chu, a fellow knife expert and performer. When Cheung and fellow members hear about a cave full of treasure, they decide to go and force Sunny to tag along. However, they are soon in for what could be a living nightmare.

During World War II, the Japanese have used the cave for experiments using biochemical weapons to turn prisoners into raging mutants. When they were forced to end the experiment, the chemicals were places in a canister. When the group encounters the canister, they accidentally release the chemicals, causing them to mutate. In an attempt to escape, Sunny, who had ballooned up but is given superhuman strength, kills Chu’s brother. In the onslaught, still into mutated form, he meets reporter Angel Chan (Shu Qi) before returning to Hong Kong.

Having reverted back to normal, Sunny learns he still have part of his powers, but not necessarily the turning big part. When he saves a policewoman taken hostage due to his newfound skills, Angel turns Sunny into a hero. This not only attracts Angel, but two paranormal experts, Suen Ho and Tai. However, Sunny’s newfound fame also attracts the attention of Chu and the rest of the infected troupe, who become more mutated as time goes on. Chu wants revenge for his brother’s death and learning of Sunny’s relationship with Angel, seeks to have the reporter for himself as well. Chaos soon ensues for all involved as Hong Kong truly becomes a “city under siege”.

Director Benny Chan has always come up with contemporary action films in Hong Kong. This includes Gen-X Cops (1999), its sequel Gen-Y Cops (2000), which featured Paul Rudd and Maggie Q in major roles; and Jackie Chan’s New Police Story (2004). While he may not have written all of the films he had directed, he has had some hits and had some misfires. For this homage to the superhero film, or even X-MEN if you will, Chan hypes up the film in making the film somewhat laughable yet at the same time, still entertaining.

Pop star turned actor Aaron Kwok, fresh off his breakthrough performance in the Roy Chow-directed Murderer (2009), hams it up to perhaps his early 90’s work as our hero Sunny. Starting out as a loser in a circus, he becomes the only one capable of stopping his fellow mutants. However, before he gets the chance to take on those who had bullied him, he is given a sense of fame when he saves a hostage from a maniacal gunman. This leads to Sunny appearing in all sorts of television ads and interviews as if he is a famous Hollywood actor. We don’t really get to see the heroic Kwok as Sunny until the final confrontation against nemesis Chu, played with such evil by Collin Chou, a Kung Fu Cinema favorite.

While the primary focus of the film is on the mutants, there is quite an interesting subplot involving two paranormal experts who are also martial artists and befriend our hero after seeing his true nature. They are played by Wu Jing and Zhang Jingchu. At first, you can see they are being cautious, but ultimately, using their natural kung fu skills, are able to help Sunny hold the mutants back and while there is some tragedy involved, Wu and Zhang truly play an integral part in the film. Shu Qi does her best as the damsel in distress mode when necessary, but she also tends to be strong when needed as reporter Angel, who falls for our hero and is the object of desire by our lead villain.

The team of former Jackie Chan Stunt Team leader Nicky Li and Ma Yuk-Sing handled the film’s fight sequences. Being a film revolved around mutants, there are loads of “wire-fu” sequences mixed in with some actual technical work on the part of Wu and Zhang. The final confrontation between Kwok and Chou is a two-parter, beginning with a chase scene where at one point, both hero and villain fight on top of a moving truck (an homage perhaps to some of our favorite 80’s-90’s kickboxing-style films from Hong Kong), ending it with a Western-style showdown with knives.

In conclusion, City Under Siege is best described as goofball fun entertainment. It may not compare with the likes of X-Men obviously, but is a campy type of way, it’s not that bad of a film. See it with limiting your expectations.