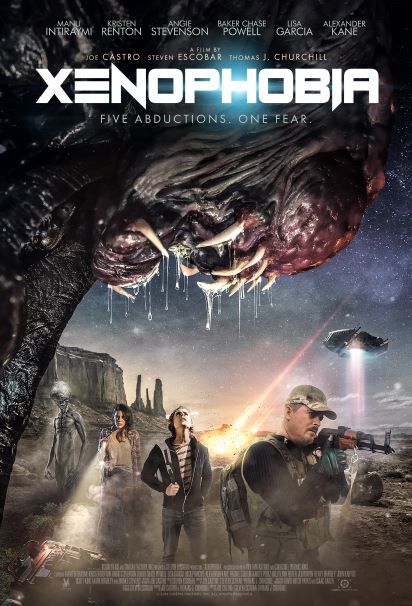 A support group who found themselves abducted by aliens tell their stories in this somewhat anthology of tales from the minds of Joe Castro, Thomas J. Churchill, and Steven J. Escobar.

Eric is a traveler who had come to Vegas to meet with friends. Arriving early, he decides to take photographs of the pinnacles in the mountains. However, he soon finds himself abducted by aliens who experiment on him by implanting things in him. Waking up back on Earth, Eric learns about a support group on alien abduction and makes the decision to go there. Upon his arrival there, he meets John, the leader of the support group and fellow abductees Becky, Matt, and Melanie.

Becky tells her story of how she was abducted after her husband Harry ended up possessed by an alien to carry out a mission. Suddenly, Karen, a frantic mother arrives to tell her story of how her daughter Cynthia was abducted during a babysitting job. Matt tells his story of how the alien Karen described is the same as the one he encountered. Finally, Melanie tells her story of how she, a once battered woman who has since become an avenger of sorts, finds herself dealing with an alien threat who had taken on a human form and didn’t realize it until it was too late. What will these people do after they let out their stories with an alien invasion imminent?

As a fan of horror anthologies, this is this reviewer’s first encounter with alien abduction as the premise for this anthology. What’s very intriguing about this film is that the trio of Joe Castro, Thomas J. Churchill, and Steven J. Escobar is that the film start out tame but as it progresses, so does the level of graphic violence with the final tale having more gross-out effects with the first tale, which opens up the film itself, being rather tame.

The ensemble cast of characters really give it their all here. Baker Chase Powell starts the film as newcomer Eric, the latest victim of alien abduction who arrives at the support group led by Manu Intiraymi’s John. Kristen Renton’s Becky is quite a character with the situation that she not only finds herself abducted but seeing her husband in a body snatching incident is pretty creepy, especially considering that it’s ChromeSkull himself, Nick Principe, in the role of the husband.

The big surprise comes in the form of scream queen legend Brinke Stevens, who comes in as Karen, the concerned mother who thinks her daughter has been abducted and then, we are treated to the actual story. Stevens makes the most of her role as Karen, who only has two videos to prove the story about her daughter, which leads to the very short encounter between the aliens and the most outspoken member of the support group, Alexander Kane’s Matt. Finally, we are treated to the most graphically violent story of this anthology, which revolves around Angie Stevenson’s Melanie, who tells the story how a mix-up involving alleged domestic violence is actually something more sinister in relation to our theme here.

Xenophobia does a really good job at making an anthology involving sci-fi, more specifically alien abduction. The ensemble cast is great and the stories go from tame to extremely violent, making the best of its 82-minute running time.